Caribbean rock iguanas (genus Cyclura) are the most endangered group of lizards in the world, due to habitat loss and predation from introduced mammalian predators.  The Anegada iguana is the most ancient and genetically unique rock iguana species.  With less than 300 animals remaining in the wild, the Anegada iguana is also one of the most endangered members of this unique genus.  It is the largest native land animal and dominant herbivore in the British Virgin Islands, and plays a key role in the maintenance and perpetuation of native plant communities by facilitating the germination and dispersal of seeds that pass through its digestive track. Together with our partner organizations we are working to conserve and restore the Anegada iguana and its endangered tropical dry-forest habitat.

The picture below shows the BVI archipelago. Anegada is the island above. 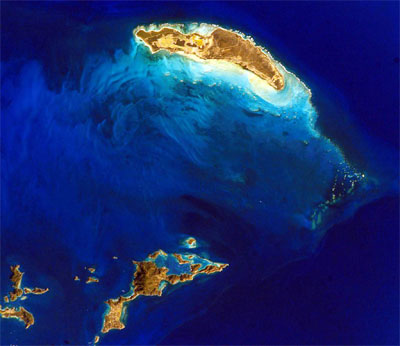 This project, financed by the Nando Peretti Foundation, seeks to implement critical components of the five-year Species Recovery Plan for the Anegada iguana, produced in 2005 by the IUCN Iguana Specialist Group in conjunction with local management authorities in the British Virgin Islands.  The recovery plan calls for increased monitoring of the wild population, continuation of the successful, on-going headstarting program, and implementation of a public education program to increase community awareness and support for iguana and habitat conservation.  These activities will be implemented through a combination of infrastructure improvements, strategic fieldwork on the iguana population, capacity building of local partner organizations, and new educational initiatives.

The San Diego Zoo's department of Conservation and Research for Endangered Species-CRES-was founded in 1975.  Originally called the Center for Reproduction of Endangered Species, CRES is one of the largest zoo-based research centers in the world.  CRES employs over 110 researchers, from wildlife biologists to geneticists and reproductive physiologists, dedicated to preserving and protecting rare and endangered wildlife and their habitats.  In addition, CRES employs education specialist dedicated to the development and implementation of outreach programs to support conservation projects.  CRES has been conducting conservation and research projects aimed at preventing the extinction of Caribbean rock iguanas since 1992 and works cooperatively with other conservation organizations to this end, including the IUCN Iguana Specialist Group, the International Iguana Foundation, the Caribbean Wildlife Foundation, Island Conservation, other zoos (including the Dallas and Fort Worth Zoos), and local government agencies and NGOs in the Caribbean (including the British Virgin Islands National Parks Trust).  CRES Caribbean Conservation Program Specialist, Dr. Glenn Gerber, has been the Principal Investigator for the Anegada iguana project since 1998.  Past accomplishments of this program include the release of 72 headstarted Anegada iguanas since 2003 with an 85% survival rate, increasing the wild population of this species by approximately 30%.

think global, act local
ABOUT US| CONTACT US| LOGIN| PRIVACY| LOGOS
you are here: Home  > Projects:  Environmental conservation or North America  (or Both)  > 2006-28  > Project Description