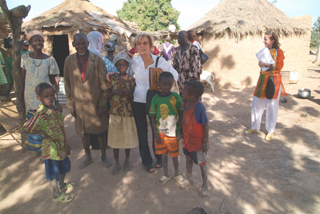 Non c'è Pace Senza Giustizia (No Peace Without Justice) is an international non profit organisation founded by Emma Bonino and born of a 1993 campaign of the Transnational Radical Party (NGO with Consultative Status to the UN) that works for the protection and promotion of human rights, democracy, the rule of law and international justice, and undertakes its work within three main thematic programs:
- International Criminal Justice;
- Female Genital Mutilation;

Priorities for action for all programs are selected on the basis of the needs as determined on the ground, involving all stakeholders in the design and implementation of activities. In advocacy activities, NPWJ raises awareness and fosters public debate through explicitly political campaigns and the implementation of key programs, such as international and regional meetings, often co-hosted and co-organised with Government of the country in which they are held, fostering partnerships between public institutions, non-governmental organisations and other actors in society, to attain stakeholders' ownership both of the political drive and of the results. NPWJ also undertakes wide-ranging technical assistance, through the secondment of legal experts to governments for the drafting of legislation and to assist in negotiations on international human rights instruments. Finally, NPWJ has acquired unique field experience in "conflict mapping" and wide scale documentation of violations of international humanitarian law in areas affected by conflicts and in implementing outreach programs engaging local communities in conflict and post-conflict areas on issues of international criminal justice.

Female Genital Mutilation is one of the most widespread and systematic violations of the human right to personal integrity, committed against millions of women and girls worldwide, and which goes unchallenged under the pretext of respecting local customs.
The overall objective of NPWJ's FGM program is to develop a political, legal and social environment contributing to changing attitudes and behaviours on FGM and favourable to its abandonment, in the context of the promotion and protection of women's and girls' rights. Specific objectives include: (1) to create political will in favour of ratification and implementation of the African Union's Protocol on the Rights of Women in Africa (also referred to as the ‘Maputo Protocol') in the target countries, to recognise FGM as a human rights violation; (2) to break the culture of silence surrounding FGM, so as to weaken the self-reinforcing social convention at the basis of its persistence; (3) to build the capacity of FGM abandonment advocates within both Government and civil society, so as to enable the development of effective FGM abandonment strategies; and (4) to build technical capacity to develop legislative measures prohibiting FGM, so that the law demonstrates and consolidates a formal, explicit and lasting commitment of state structures against FGM, contributing to turning the tide of social norms, as well as providing legal tools for the protection of women and girls willing to challenge the social convention.

In countries with a high prevalence of FGM that have shown positive signals from national leaders and civil society activists, the FGM program aims to (a) lobby and engage national political leaders, as well as cultural, religious and traditional leaders; (b) organise events to demonstrate public commitment against FGM; (c) conduct training and capacity building activities; and (d) undertake legislative capacity building and technical assistance.
NPWJ FGM work targets Governments, state structures, political leaders, government officials and legislators, in-country donor and development agencies, members of civil society, NGOs, CBOs, professional associations, and opinion-makers, including the media and traditional, religious and community leaders in the target countries and other countries in the region. Beneficiaries include NGOs, CBOs, women's groups, children's rights groups, parliamentarians, professional bodies and other formal and informal civil society groups, whose participation will ultimately benefit women and girls affected by FGM. 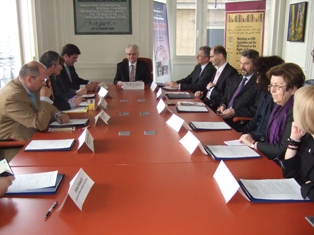 No Peace Without Justice (NPWJ) and the Ministry of Social Action and National Solidarity of Burkina Faso have organized under the patronage and presence of His Excellency Chantal Compaore, First Lady of Burkina Faso, the High Level Meeting "From Cairo to Ouagadougou: towards a total ban of female genital mutilation, which took place from 8th to 10th November in the capital of Burkina Faso.
Burkina Faso is one of the countries most affected by the phenomenon of FGM, as the 98% of girls undergo to the practice.
At the Meeting in Ouagadougou were invited the First Lady of West African countries, together with representatives of the governments and parliaments, members of NGOs of the affected countries and international and regional organizations, with the aim of developing an official document prohibiting female genital mutilation. During the meeting the participants analysed also domestic laws leading to clear and effective abandonment of FGM.
During the meeting, were analyzed patterns of law that may be common to all African countries where mutilation is practiced, so as to avoid that families crossed the borders to mutilate their daughters in countries where the law has not yet effect. Also participated representatives of the press and the major media in West Africa, to understand what could be the role of the media in contrast to this practice. Finally, participants discussed of law enforcement, in particular in countries with no women's prisons and those in which imprisonment may mean total social exclusion of women accused of practicing FGM, rather than steer a course of rehabilitation.

The Nando Peretti Foundation has awarded a grant to achieve an increase in capacity for strategic planning and increased cooperation between FGM abandonment advocates in government and in civil society. This could prevent ineffective or even counterproductive methodologies, that fail to address FGM in the broader framework of the promotion and protection of women's rights, and therefore can have -and have had- negative consequences. A clear example has been the exclusive emphasis on the unhygienic conditions and harmful medical consequences of FGM, to the extent that have been providing mutilators with sterilised instruments. This has resulted in its increasing "medicalisation", particularly among emerging urbanised social classes, that might have otherwise led the way to its abandonment, so that "clean" forms of FGM have been maintained among urban and middle-class women, depriving society of potential positive non-mutilated role models, resulting in considerable set-backs in the progress towards abandonment of the practice.

NPWJ FGM work is designed to provide a framework within which individual initiatives by various actors complement and reinforce one another; and, through its focus on the Protocol on the Rights of Women in Africa, contributes to the awareness, promotion and protection of a broader range of women's and girls' rights. NPWJ FGM work seeks to attain sustainability through increased political will to adopt effective legislation promoting women's and girls' rights; more effective strategies involving both civil society and state structures; enhanced professional and advocacy capacity of FGM abandonment advocates and a better-informed donor community in the target countries; public commitments by political leaders; and the development of a political, legal and social environment favourable to FGM abandonment.