The project, which received a grant from the NPF, involves the following works:

The roof has been laid with pianelle and coppi, a terracotta tile roofing technique dating from the end of 1800. It shows several water leaks which have affected the texture of the wooden support beams and resulting in several leaks in the rooms below. In addition to this there are many asbestos water tanks in the attic which are no longer in use and potentially dangerous.
The project has the aim to strengthen the structure, eliminating materials harmful to health, thus ensuring the guests a healthier environment and a more comfortable place to stay. It aims at  securing the building by eliminating infiltrations, giving residents more secure and comfortable accommodation, and in  the medium range, to reduce costs, resulting in the increase of resources for assistance.

St. Peter's Club in Rome was founded in 1869 by a group of young people eager to show loyalty to the Pope and the Church.
With His Holiness Pius IX's blessing, the club starts a charity in the Rome's diocese , which will cause it to be known as the "...Charity Arm of the Pope...".
During more than 140 years the Club has acted in many fields of material and spiritual poverty and destitution, many charities have followed the changing needs of the moment in history. Among the existing ones the Economic kitchens, the Nocturnal Shelters and the Residential Homes, are more than a century old.
The St. John in Lateran Residential Home was opened in 1965 as a result of His Holiness Pope Paul VI' wish, and since then it welcomes young women living in Rome for study or work. The guests also receive spiritual assistance provided by a priest who visits the Home by appointment.
The home currently houses 25 girls. The opportunity to proceed with the gradual restructuring of the building and the consequent rationalization of space would improve and increase the services supply even by varying the target directing it to the most needing. 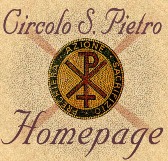