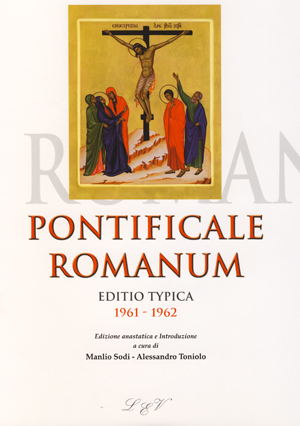 The project co-funded by the Nando Peretti Foundation consisted in publishing - as part of the Monumenta Liturgica Piana series - the original version of the Pontificale Romanum Editio Typica 1962.

The Pontifical is practically an episcopal ritual, containing formularies and rubrics for the sacraments of confirmation and Holy orders; however, it does not include the rites for the Mass or the Divine Office, which can be found in the Roman Missal and Roman Breviary, respectively.
The Pontifical includes the texts and rubrics which existed in the old sacramentaries and Ordines Romani, and were gradually collected together to form one volume for the greater convenience of the officiating bishop.
In medieval times, collections were known under the names of Liber Sacramentorum, Liber Officialis, Liber Pontificalis, Ordinarium Episcopale or Benedictionale.
Under Innocent VIII, a standard version was published for the use of the entire Roman Rite, under the title Pontificale Romanum.

think global, act local
ABOUT US| CONTACT US| LOGIN| PRIVACY| LOGOS
you are here: Home  > Projects:  Cultural/Artistic or Europe  (or Both)  > 2007-03  > Pontificale Romanum