Publication of the Breviarium Romanum 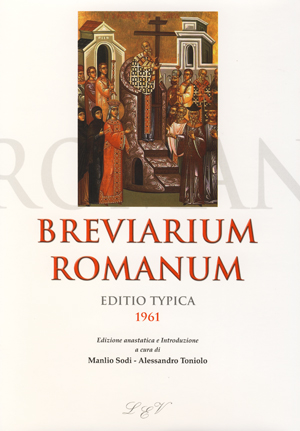 The project co-financed by the Nando Peretti Foundation consists in publishing - inside the Monumenta Liturgica Piana series - 1.000 copies of the original version of the Breviarium Romanum. The book will be edited with the theological introduction of Manlio Sodi in 2 colors.

The Breviarium Romanum (Roman Breviary) is the liturgical book of the Latin liturgical rites of the Roman Catholic Church, containing the daily hours of Roman Catholic prayer, hymns, the Psalms, readings, and notations for everyday use, especially by bishops, priests, and deacons in the Divine Office.
The volume was published as the Breviarium Romanum until the reforms of Paul VI, when it became known as the Liturgy of the Hours. However, these terms are used interchangeably to refer to the Office in all its forms. This entry deals with the Breviary prior to the changes introduced by Pope Paul VI in 1974.
The canonical hours of the Breviary owe their remote origin to the Old Covenant when God commanded the Aaronic priests to offer morning and evening sacrifices.
At the beginning stands the usual introductory matter, such as the tables for determining the date of Easter, the calendar, and the general rubrics. The Breviary itself is divided into four seasonal parts-winter, spring, summer, autumn-and comprises under each part:
• the Psalter;
• Proprium de Tempore (the special office of the season);
• Proprium Sanctorum (special offices of saints);
• Commune Sanctorum (general offices for saints);
• Extra Services.

think global, act local
ABOUT US| CONTACT US| LOGIN| PRIVACY| LOGOS
you are here: Home  > Projects:  Cultural/Artistic or Europe  (or Both)  > 2007-03  > Breviarium Romanum
Project links: