Medulloblastoma (MB) is the most common malignant tumour occurring in the central nervous system (CNS). Despite the recent advances in understanding the pathogenesis of this tumour, and the progresses in surgery, radiation and chemotherapy in the clinical practice, the survival rate is still ranging from 50-60% at 5 years and 40-50% at 10 years. So far the main limitation of the current treatment is the lack of specificity, the goal of the project here proposed has been to offer new therapeutic tools to improve mortality and morbidity of MB patients.
AIRC aimed to contribute to the molecular basis of MB and to design new therapeutic strategy
oriented to impair the stem-like proprieties of MB or/and the main aberrant pathways involved in the tumor progression and the chemo-resistance to cisplatin, observed in a sub-set of MB patients.
All together these comprehensive approaches underlie the importance of novel potential therapeutic strategies to enhance patient-personalized therapy in MB in the near future.
The main limitation of the current treatment of MB is the lack of drug specificity. The Prof. Zollo's team aimed to elucidate the signaling pathways involved in normal development of MB thus improving the clinical management of this neoplasia and suggesting new therapeutic tools to impair mortality and improve morbidity of MB patients. The team focused on the searching for specific impairment pathway drugs (WNT, NOTCH, SHH), making use of a new library of compounds both synthetic and natural. These compounds were screened for their ability to impair WNT and Notch pathways by using luciferase assay methods and to slow down tumorigenesis on MB cell lines. Three interesting drugs were identified and tested in vitro on three different MB cell lines to check the anti-tumoral activity. Norcantharidin (NCTD) in vivo efficacy was also tested in vivo in orthotopic intra-cerebellum xenograft animal models. These animals were injected with DAOY MB cell line previously stably transfected with luciferase gene and MB tumorigenesis were followed by in vivo imaging (BLI) technologies. Upon three treatments per week of the peritoneal administration for a total of 15 days, tumorigenesis was observed significantly decreased showing a neural-differentiation phenotype. These results have a translation therapeutic potential for two main reasons: 1) NCTD impairing WNT signaling induces a benign neuronal-differentiation and then 2) it could be administrated systemically by injections into peritoneal, since we show it is able to cross the blood brain barrier (BBB). A manuscript has been prepared and it will be soon submitted to a journal within this area of research. For the future planning, it is proposed to continue the screening
of natural and synthetic compounds looking for those impairing the Shh/GLI pathway in vitro and to test the anti-tumor activity in vivo by using xenografts animal models. The aim will be to identify new drugs which show a clear effect on the main aberrant pathways in MB and inhibition of the propagation of stem cells. 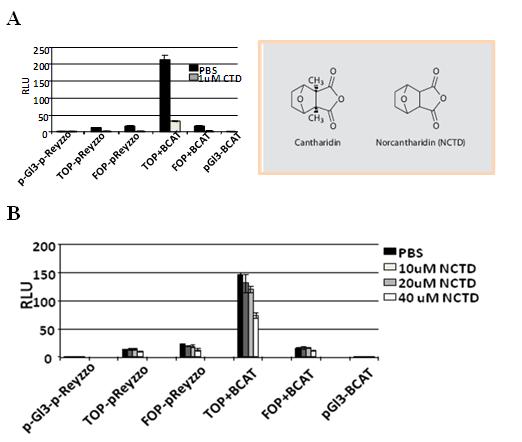 Figure 2.  HEK293T cells were transfected with the luciferase reporter constructs TOP-FLASH, containing n.4 Tcf consensus binding sites upstream firefly luciferase cDNA, or FOP-FLASH, a plamid with mutated Tcf binding sites and beta-catenin-cmyc-pCAN plasmid. The cells were treated with 1μM of selected compound dissolved in DMSO. After 24h of treatment, luciferase assay was performed; each experimental point was performed in quadruplicate and the RLU (Relative Luciferase Unit) value was calculated. Cantharidin (CTD) shows to impair TOP-FLASH signal at very low concentration (A). Norcantharidin (NCTD) is CTD analogue which has been previously reported to show less toxicity in vivo . A comparison between NCTD and CTD within the WNT TOP/FLASH system has been observed. NCTD acts at higher concentration respect to CTD (B). 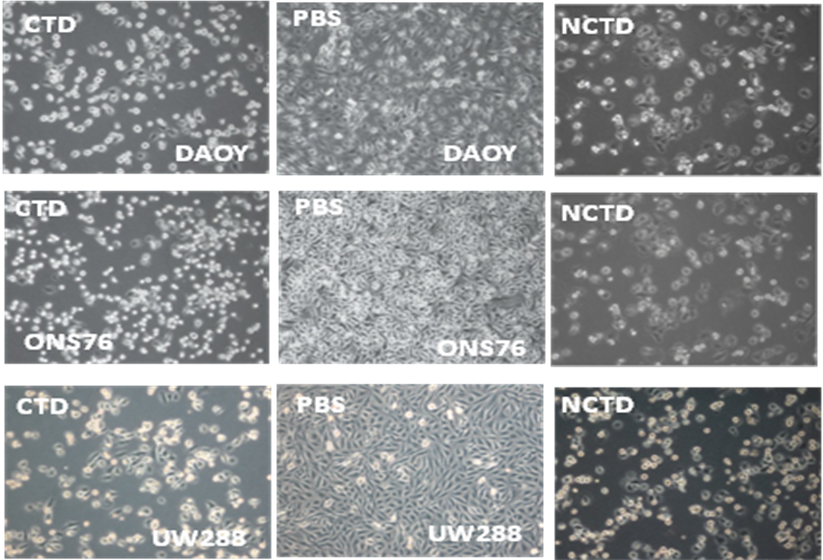 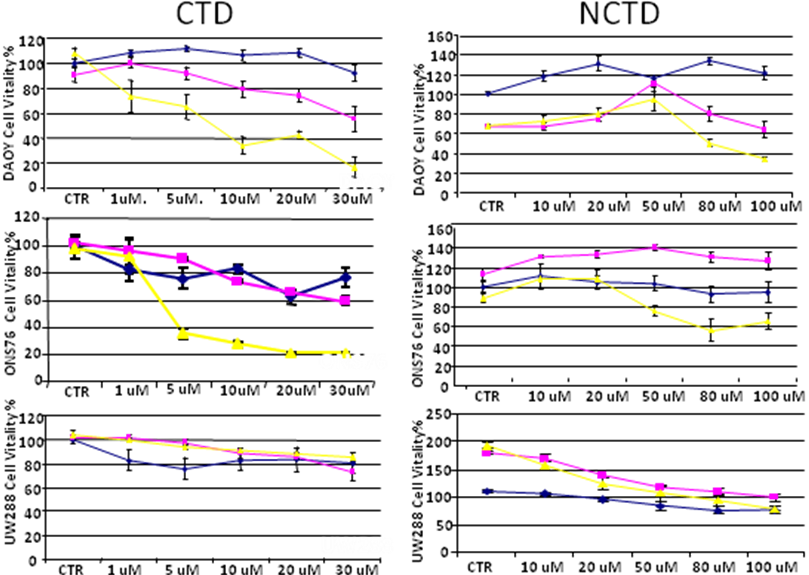 Figure 4. Treatment with CTD and NCTD activates an apoptotic cascade as it has been shown by capsase assays. This assay measaures the activity of caspase-3 within the cells, after 24h of compounds incubation. The graft bars show the fold of activation with respect to untreated cells. 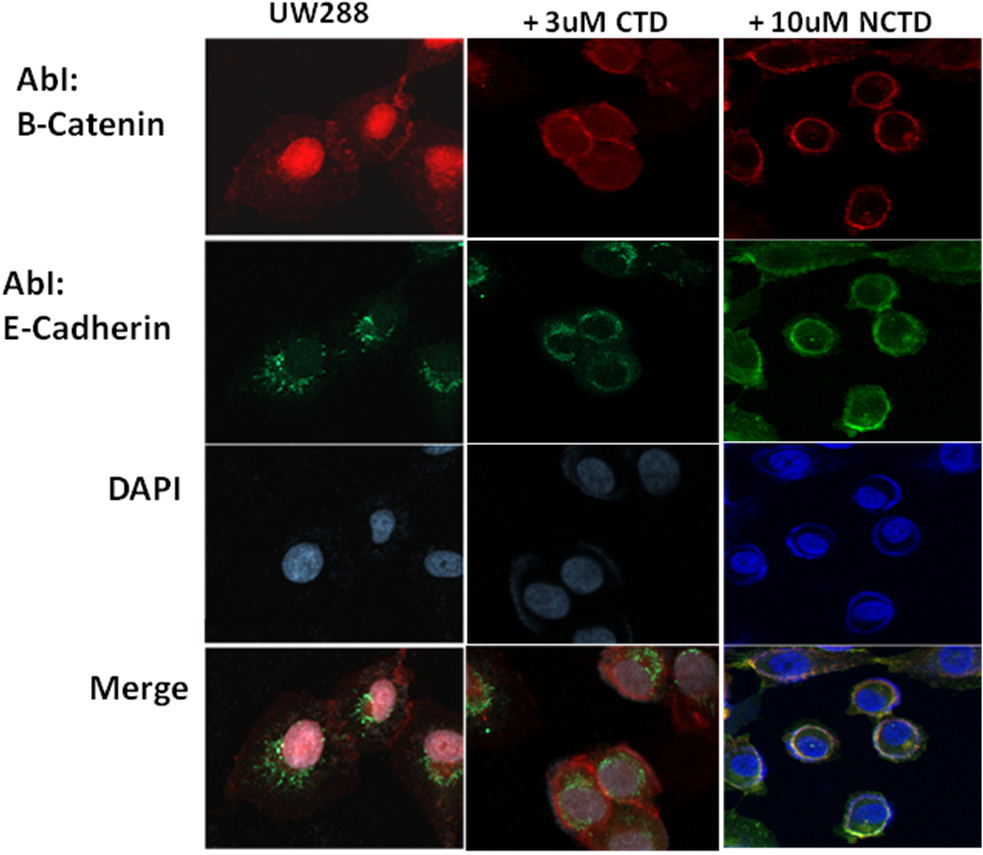 Figure 5. Immunofluorescence assay has been performed on UW288 MB cell line to unreveal the b-catenin cellular localization. In untreated cells, we observed a strong nuclear localization of β-catenin. Upon CTD and NCDT treatments, the amount of β-catenin in the nucleus is strongly decreased, meaning of WNT off signaling occurring. In these cells it is shown the E-cadherin and β-catenin co-localization . In untreated cells, E-cadherin shows a perinuclear localization some puntate staining into Endoplasmatic Reticula (ER) whereas upon CTD and NCTD treatments it moves mainly to plasmatic membrane where it co-localize with β-catenin.

Figure 6. Upon treatment with CTD and NCTD at choosen concentrations, the Wnt signaling is impaired as shown by Western Blotting. Antibody anti activated β-catenin recognized amino acid residues (aa36-aa44) of human Catenin, specific for the active form, dephosphorylated on Ser37 or Thr41. 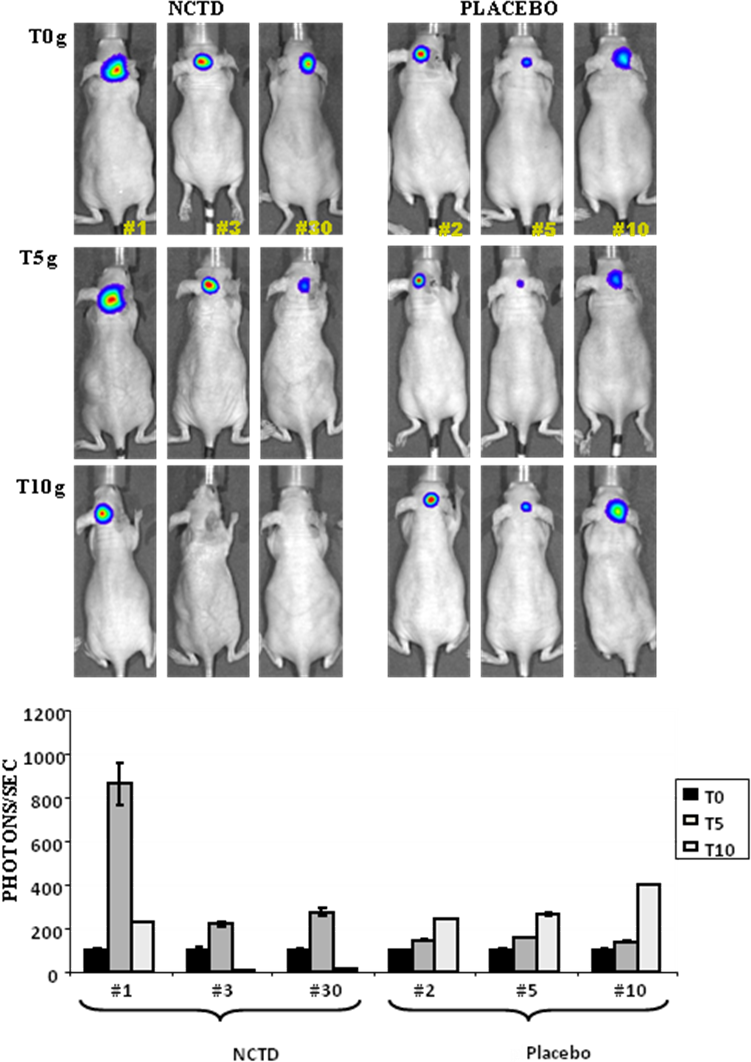 Figure 7. 3 x105 DAOY-LUC cells were injected intracerebellum in NOD/SCID mice at 6 weeks of age and analyzed for 20 days; the tumorigenesis was evaluated by in vivo Bioluminescence assays (BLI). The animals were divided in two groups; NCTD group (2mg/prokg/day; 7 days a week) presents BLI values higher than placebo animal group. The mice were then imaged at before (T0) and after treatment : 5 and 10 days analyses (T5, T10). The photons/sec were detected by IVIS-Spectrum, Calipers/Xeongen IVIS 3D Illumina instrument and for each animal the BLI values were normalized with respect to their own T0 value.