Phenylketonuria (PKU) is an autosomal recessive genetic disorder characterized by a deficiency in the enzyme phenylalanine hydroxylase (PAH). This enzyme is necessary to metabolize the amino acid phenylalanine to the amino acid tyrosine. When PAH is deficient, phenylalanine accumulates and is converted into phenylpyruvate (also known as phenylketone), which is detected in the urine. PAH is found on chromosome number 12.

Left untreated, this condition can cause problems with brain development, leading to progressive mental retardation and seizures. However, PKU is one of the few genetic diseases that can be controlled by diet. A diet low in phenylalanine and high in tyrosine can be a very effective treatment. There is no cure. Damage done is irreversible so early detection is crucial. 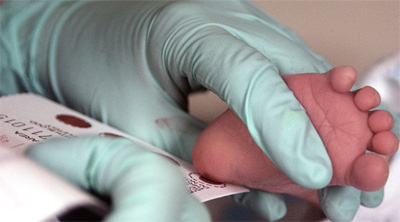 Blood is taken from a two-week old infant to test for phenylketonuria.

The JCA PKU was established in 1998 to manage and prevent Phenylketonuria (PKU). Among its goals are preventative measures to reduce mental handicap for PKU, such as early detection of affected children and early onset of proper treatments. At its inception, only 36 patients were known and registered. Resources were scarce, professional and public awareness was minimal.In 1994 the known number of PKU affected children was only 10. Increments of documented PKU patients were added year after year. At present there are 143 PKU affected persons. The youngest is 3 months old and the eldest is 32 years. Only 22 (15.4 %) were diagnosed as new born, 3 of whom were detected during the early stages by the National New Born Screening Programme which started in 2006 as a pilot screening project and has been expanded in 2007 to 7 of the 12 governorates in the Kingdom. Others who were diagnosed later have achieved improved mental abilities, sustained growth and controlled seizures. Eighty one (56.6%) of PKU patients were detected after May 2002 when Guthrie Dry Blood Spot Test became available. JCA PKU cooperated with the Ministry of Health in facilitating the availability of the test. However this is an under estimated number of registered PKU sufferers because of the presence of several mentally handicapped persons in the extended affected families, where the cause of the handicap had not been investigated and could easily be undiagnosed PKU.

The numbers of documented PKU sufferers could be the tip of an iceberg. In the presence of the high rate of consanguineous marriage (cousins and relatives marrying), the incidence of PKU is expected to be much higher.

Relatives (first cousins) marriage rate in Jordan is 50 (36) %.
Relatives (first cousins) marriage among PKU parents is 85 (70) %. High rate of cousins marriage contribute significantly to a high incidence of such inherited diseases like PKU.
The incidence of PKU ranges between 1:3.400 and 1:6.000 live births in other Middle Eastern countries where it is customary for cousins to marry. In Jordan the incidence is not expected to be lower.

Considering the present birth rate in Jordan, about 25-30 newly detected PKU infant are expected to be born every year. As New Born Screening starts, more and more infants with PKU will be detected. There will be an increased demand for ways to deal with the condition, particularly Phenylalanine free formulae and Low Protein Food items.

Phenylketonuria, a genetically recessively inherited disorder (Phenylalanine aminoacid accumulates in the blood, causing damage to the brain cells) which if left undetected can cause severe mental handicaps. Treatment world wide relies mainly on low protein food management. PKU affected patients depend mainly on the consumption of measured Low Protein Food and lowfree Phenylalanine diet. Special Phenyalanine free formulae has been provided free of charge by the government to all Jordanian PKU sufferers. Special Low Protein Food is not available in Jordan. Without such food, the conditions of PKU patients worse, with deterioration of their mental abilities and general health.

In order to prevent mental handicap caused by the disease (PKU), affected children have to be maintained on Low Protein Food and their Phenylalanine blood level should be monitored regularly. Absence or deficiency of proper Low Protein Food would raise Phenylalanine aminoacid blood level and lead to brain damage. In the presence of uncontrolled low protein diet and in the absence of this necessary food, children's I.Q. drops by 1 every week. Availability of the requested Low Protein Food will contribute significantly to maintaining children's good growth and development. Their ability to be educated and trained will improve and their I.Q. will be raised through out proper follow up. The cornerstone of a normal mental ability of a PKU affected child is maintaining normal levels of blood Phenylalanine via Low Protein Food which will also provide a good source of staple food and calories. PKU sufferers are deprived of milk and milk products consumption. Therefore Low Protein Cheese will provide Calcium supply.
The Nando Peretti Foundation provided funds to provide Low Protein Food. Affected families will be invited to a meeting in the Jordanian PKU Society for food distribution.