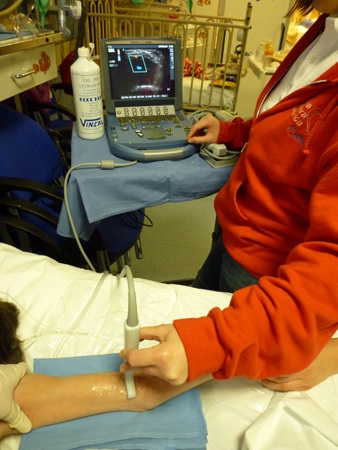 Ultrasound guided central venous cannulation (CVC) has been advocated as a means to reduce time to cannulation, number of attempts, and overall complications. Increasing evidence supports the role of ultrasound in young patients during CVC cannulation.
The aim of this study co-funded by the Nando Peretti Foundation was to evaluate the advantages of ultrasound for central venous/arterial catheter insertion in young children (0-4 years) admitted to the Pediatric and Neonatal Intensive Care Unit (PNICU).
We inserted 95 central venous/arterial central catheters on 82 children in one year study (2008-09). In 96% of the procedures US guided cannulation was successful.

The following advantages were attained upon application of US guided CVC cannulation:

1) Residents with little or no experience were able to cannulate central veins at first or second attempt. The time of the training process of the central vein catheterization was thus considerably reduced through this technique.

2) In infants less than 1 year of life, internal jugular vein cannulation that is commonly reserved to older patients could be successfully performed in 92% of the attempts.

3) In children with multiple CVC placements, who are at high risk of venous thrombosis and failure of subsequent CVC attempts, further placement of central venous catheters was successful in 92% of the procedures.

4) In children with neuromuscolar disorders with spastic dyplegia and difficult central venous approach, CVC was successful in 100% of the procedures.

6) Hemodynamic monitoring has been implemented since the use of US guided CVC because of the easier CVC positioning. As a result vasopressor drugs could be optimally titrated and new therapies could be sperimented.

Diffusion of the results:

think global, act local
ABOUT US| CONTACT US| LOGIN| PRIVACY| LOGOS
you are here: Home  > Projects:  Medical research or Europe  (or Both)  > 2008-06  > Interim Report
Project links: