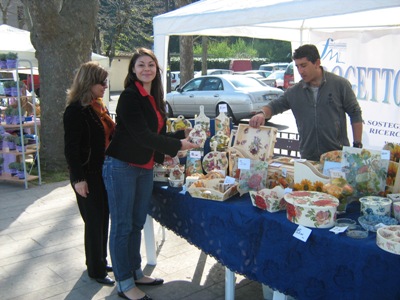 The implementation of the "One Planet" project has been possible thanks to the funding from the Nando Peretti Foundation. The project has been aimed at ten psychiatric patients aged between 20 to 40 years old. Starting in January 2008, the project took place as a craft workshop twice a week, for a six hours duration. The workshop, as well as being the steady framework for an intervention of great therapeutic relevance, has also became a space where patients not only organize and carry out an actual entrepreneurial activity, but also find a place where they can share with a group their own difficulties, acquiring in doing so greater confidence in their own abilities on a practical as well as relational level. In this project the working activities are carried out in an environment respectful of the individual modalities and times. The self-awareness regarding one's own illness and at the same time the possibility of working experimenting one's own previously hidden resources, is the first fundamental outcome of the therapeutic work of the "One Planet" project.

The workshop is the "space" where skills such like socialization, sharing, self-control, self-esteem, trust in interpersonal relationships, accuracy on the job and an appropriate sense of belonging to a work-team are highlighted and experimented. Patients during the development of the project have shown the need of a lunch-break of whose management they have been put in charge, creating thus a further "space" throughout the work day, where they can experience the ability of confronting themselves with their own independence and of organizing an highly socializing activity involving the whole work team.
From a productive point of view, the demand for products has been steadily increasing. The income from sales, going to patients in its entirety, has enabled to grant each one of them a monthly payment.
The sale of products has taken place at arts and crafts market fairs around the area of the Bracciano Lake (Rome) and enabled patients to get in touch with the territory in a completely "natural" way and to manage to establish efficient and functional relationships.
In the first four months of the project, nine market fairs were carried out during the week-ends from 9 a.m. to 7 p.m. In spite of the considerable commitment involved, patients always showed great availability and willingness that hasn't decreased over time even when faced with some practical difficulties
On market days, patients cooperated to the setting up of the stall, taking charge directly of the different stages of the sale such as the description of the technique used, information about prices, money management, packaging of the product and, at the end of the work day, saw to the tidying up of all the material.
In such working context, all those aspects of fear, mistrust, despise, often detectable in those who interact with psychiatric patients and that often lead to behaviours of exclusion and/or neglect, disappeared. Patients could establish authentic relationships of friendship and collaboration also with the other sellers present at the fair, experiencing thus the restitution of a too often not acknowledged dignity. 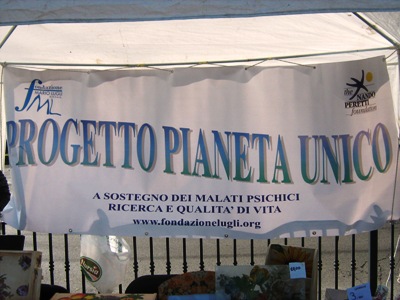 The continuation of the "One Planet Project", now in its third year, has been possible thanks to the funding provided by the Nando Peretti Foundation.
The awareness of their illness and at the same time the possibility of working experimenting their own submerged resources, is the first main result the therapeutic work of the "One Planet Project" achieved in these three years.
Throughout these years the initial project, that provided for the realization of an arts and crafts workshop, saw an evolution that led to the development of an authentic business activity.
Within the workshop two patients were identified to carry out the role of "Tutors" working side by side and supporting new participants.
This role provided them with a valid acknowledgment of the outcomes achieved in the production process, also through an adequate financial monthly payment.
The workshop has became the stable framework of a therapeutic intervention of great relevance; the place where skills like socialization, sharing, self-control, increased self-esteem, trust in interpersonal relationships and an appropriate sense of belonging to a working group composed by patients and workers, were highlighted.
A lunch break during the working day at the workshop has been particularly socialising and therapeutic, managed directly by patients and representing a further commitment and opportunity to experiment oneself in the interaction with other members of the working group.
The sale of goods taking place in high visibility places such as Fairs and/or antique markets, led to a considerable increase in sales whose profits (particularly high in this past year) assured to each patient a monthly financial revenue.
During Fairs (which have been taking place once a month) patients themselves took part in the setting up of the stall, in the sale's stages, describing to the public the techniques used (mainly on wood and glass), managing the money themselves, the packaging of the product and looking after the tidying up of the material. Moreover, given the increase in sales, customers have been coming back loyally, also requesting handicrafts on demand (for particular events), consolidating patients' awareness about their artistic and expressive capacities as active and competent people.
To patients the workshop has represented a fundamental stage in the therapeutic process where they could experiment themselves as people able to maintain a work commitment, giving them the opportunity of "detaching themselves", in time, from it to initiate activities also in environments not considered "protected".
The "One Planet Project" represented a fundamental stage in the therapeutic rehabilitation pathway of the patients who participated to it, for three years, giving them back a dignity too often not acknowledged.