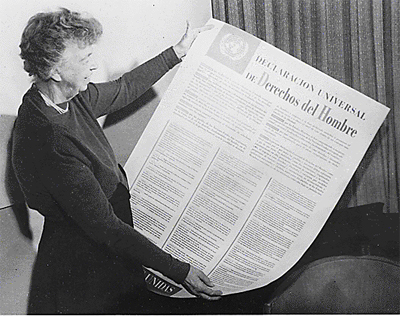 Eleanor Roosevelt and United Nations Universal Declaration
of Human Rights in Spanish text
Monica Feria Tinta -the person in charge of this project- is an award-winning public international lawyer whose work in the area of human rights has been ground-breaking. She successfully litigated the first international case concerning protection of children in times of war obtaining a dictum where for the first time in history, a human rights tribunal pronounced itself on the duties of the State toward children in the context of an armed conflict, and where violations of the right of the child in that context had for the first time in history, legal consequences: Feria Tinta's legal pleadings secured a nearly 1 million compensation award for torture and extrajudicial executions of two minors in the hands of State actors, as well as other forms of satisfaction including that a school be named after the victims. She has combined scholarship together with legal practice. She is author of The Landmark Rulings of the Inter-American Court of Human Rights on the Rights of the Child, and has published widely in international journals in areas including international human rights law, international criminal law, international humanitarian law and international refugee law.
In 2002 Monica Feria Tinta founded the Juarez Cruzatt and others case community organisation, a project concerned with justice for victims of human rights violations during the Fujimori dictatorial regime in Peru. Her efforts leading this project produced an historic judgment issued by the Inter-American Court of Human Rights in 2006: The Castro Castro Prison case. Being perhaps one of the most important cases on prisoner's rights in the annals of human rights litigation since the Second World War, the Castro Castro prison judgement recognises as torture a wide spectrum of practices inflicted both on men and women on detention, that had never been tested before a human rights tribunal. It is also the first instance in which this regional international tribunal recognised rape and different forms of violence against women as violations of human rights and as a form of crime against humanity, applying a gender perspective in its analysis of the law. As such it is the first instance in which violence against women was to have legal consequences in the American region. Feria-Tinta was one of the victims affected by these violations.

The case was to have major impact on the accountability of a former head of state for atrocities: the judgment had a crucial role to ensure Alberto Fujimori's extradition from Chile to Peru to stand trial for gross human rights violations as the Inter-American Court ordered the criminal investigation of Alberto Fujimori for the facts related to Castro Castro case. Last Tuesday, Fujimori received a 25 years prison sentence for gross human rights violations and face now further prosecution for the Castro Castro events. As a result of her work Feria Tinta was awarded the Inge Genefke International Award in 2006 and was co-recipient of the Gruber Foundation Justice Prize 2007.

The current project co-funded by the Nando Peretti Foundation  aims to take that experience of justice-seeking to a different level for future generations. In the midst of her work as a legal representative Feria Tinta had to interview and take testimonies from the younger relatives and children of the victims and realised that human rights violations of the sort of violations at stake in her work, affected a society across many generations. Indeed her legal pleadings in the Castro Castro case were dedicated to the child -today of 16 years old, and who was born with congenital health problems as a result of enduring a massacre and gassing whilst in the womb of her mother -of one of the victims who was pregnant at the time of the events, and who endured gassing with phosphorous gases in the Castro Castro prison and survived open shooting despite her state. Feria-Tinta realised that it was necessary to convey a narrative that could transmit to younger generations a positive way to deal with trauma: a narrative that could encapsulate not only the experience of Peru of those years, of those prisons visited by atrocities and the challenges of seeking truth and justice, but the path to healing and to start anew despite adversity and suffering.

In 2004 the writer found herself trying to get attention from the media about the atrocities taking place in the Castro Castro case and she was talking to a journalist from Newsweek about the role of Fujimori in atrocities in Peru. The journalist said: "Massacres are not news". The writer understood there that massacres and atrocities were everyday occurrences to the point that the media would not consider that "a new". That fact hurt her. She thought she had survived an extraordinary event that could only arouse condemnation from the international community. Yet, this event was actually an "ordinary" event in the current state of the world.
This project intends therefore to educate international community on the immorality of our responses (of the person who did not lived to such events and on the different reactions of those that living it block it or prefer not to do anything about it) showing what it takes for an individual to refuse conforming to indifference. Moreover this account describes the complex and human manner how atrocities -and the trauma that results from it- affects and travels through generations.
The Nando Peretti Foundation has as one of its focuses the rights of children and younger generations and supports educational projects. This project has a key educational component and a key audience are younger generations.

think global, act local
ABOUT US| CONTACT US| LOGIN| PRIVACY| LOGOS
you are here: Home  > Projects:  Educational or Europe  (or Both)  > 2009-24  > Project Description