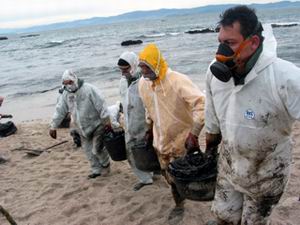 all photos on this page Antonio Nodar

The objective of this project is the development of two systems to detect oil spilled onto the maritime environment, to make possible their control, and to identify the ship responsible for the spill. The proposal contemplates the development of two alternative methods for the detection of hydrocarbons in the maritime environment: radar systems and fluorosensors. Both systems possess characteristic that make them complementary to each other.

Radar systems, specifically those known as Synthetic Aperture Radar (SAR), are characterized for being devices that, aboard airships or satellites, permit the detection of oil slicks with great resolution and covering extensive zones. They work day or night, and in the presence of clouds, this last point is of much importance for the observation of the Galician Coast. The European Spatial Agency (ESA) owns three of these devices aboard the satellites ERS-1, ERS-2 and ENVISAT, that allow the taking of SAR images in our coast. The device proposed in this project studies the radar signal received to detect the existence of oil spots and obtain additional information, as could be their size and thickness.

Another device proposed for the detection of hydrocarbons is the fluorosensor. Hydrocarbons, when illuminated by a ray of light with certain properties, emit a spectrum of fluorescence that is characteristic of the substance in question. In this project, we intend to use fluorosensors not only to detect oil slicks but, also, to detect some of its characteristics (extension, thickness, if is fragmented in the shape of small nuclei and the average size of you said nuclei, etc.) as well as to know the depth at what is found.

The information that both tools provide needs subsequent processing for which we intend to employ a system of artificial intelligence. This method is particularly designed for this problem since, as opposed to the traditional techniques of pattern recognition; it does not depend on the existence of models for the statistical properties of the signals that, in the case of detection of petroleum spots on water, do not exist.

Each group of participating researchers is in charge of a specific task: the University Federico II of Naples carries out the electromagnetic simulation of radar signals, that the University of Santiago de Compostela evaluates using the relevant experiments, with which obtains the physical-chemistry characteristics of the hydrocarbons. The University of A Coruña develops the final artificial intelligence systems (Artificial Neural Networks " Redes Neuronales Artificales " RNAs), and the Polytechnic University of Madrid develops the fluorosensor system.

1. University of Santiago of Compostela (USC) and University Federico II (Naples, Italia)
The operation of radar is based on the transmission of radio waves that are reflected by the objects found in their path. The energy reflected by said objects is scattered in multiple directions, and part of it is returned in the direction of the radar, this is called backscattering. The quantity of energy scattered in the direction of the radar depends on the object in question. This characteristic permits the utilization of radars to obtain images of the terrestrial surface: registering the differences of intensity of the echoes received across the width of the beam which the antenna displaces along the surface. In the case of oil slicks in the ocean, a spot of fuel in the marine surface produces a drastic decrease of the waves capillaries, this reduces the electromagnetic backscattering in the areas where the fuel is present and generates dark zones in the SAR images. Unfortunately, dark zones can appear due to other phenomena, such as the lack of wind. Therefore, it is necessary to resort to methods that solve these false positive readings. This can be done by means of the characteristics of the backscattering of the radar.

The university of Santiago of Compostela and the University Federico II of Naples, have designed a radar system to measure the backscattering in a controlled environment, and for the subsequent generation of the examples needed for the design of an artificial intelligence system. The radar system (see figure 1) is comprised of the following components:

Once the system was designed, we proceeded to seek commercial equipment with the desired characteristics and that would adapt to the proposed budget. The final device is composed as follows:

We have taken advantage of the elements already in possession of the Radiant Systems Group, and we have proceeded to purchase the remainder of the equipment. Technicians from the company Agilent Technologies have proceeded to install the equipment and researches from the University of Santiago de Compostela have began the task of obtaining and analysing the pertinent data.

2. University of A Coruña
In this first phase of the project we have focused in the analysis and design of the system"s architecture, as well as in the functional analysis of the tests that will be carried out with the images obtained via satellite.

The criteria we utilize for the selection of the most adequate techniques were:

Artificial Neural Networks (Redes Neuronales Artificales " RNAs) present an adaptive nature, where, in the solution of problems "to program" is substituted by "to learn by example". This characteristic makes it an adequate computational model for its application when the information about the problem to be solved is scant or incomplete; but, where numerous training examples exist, such is the case with digital images. Thus, the RNAs represent a reasonable alternative to traditional techniques for processing images. If the training examples and their topology are adequately chosen, the network is capable of learning complex transformations and of generalizing, that is to say, to respond correctly to unknown inputs. 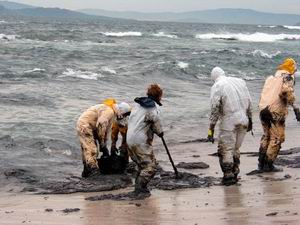 Algorithms of diffuse clustering have been extensively employed in the segmentation of images due to their high immunity to noise (unnecessary data), and their capacity to handle ambiguous information. These algorithms do not consider de membership of a pixel to a region as a dichotomist decision, but instead they employ a function of diffuse membership, which provides the degree or level in which each pixel belongs to a region. Normally a phase of "defuzzyfication" is added, which permits us to go from the values of ownership to dichotomist values in order to facilitate the interpretation of the results.

Both techniques have been employed extensively in the segmentation of this type of images, because the objects to be identified usually present descriptive and homogeneous characteristics (texture, form, colour, etc.) that favour their recognition utilizing files based on both techniques.

In the area of RNAs, the architectures that have awoken greater interest among researches, which we are implementing, are the networks of supervised learning by retro-propagation: Kohonen and Radial Basis Function (RBF). An example of the use of these techniques for the analysis of satellite images can be found in [Corsini,2003], where both techniques are used for the estimation of chlorophyll concentration in coastal waters.

The algorithms that we have implemented are: Fuzzy C-Means (FCM), Fuzzy K-Nearest Neighbour (FKNN) and Modified Fuzzy C-Means (MFCM). An example of the use of these techniques for the analysis of satellite images can be found in [Sangthongpraow, 1999] where diffuse clustering algorithms were used to studied the segmentation of images acquired via satellite.

We are also examining the combination of these techniques for the creation of new hybrid methods that will provide better results (for example: the use of the centroids provided by the diffuse clustering algorithms as a value of bias for the RBF networks).

The Artificial Intelligence Sub-group has been working in the test, from the simulation of spectra (pending of real data from the fluorosensor), of different RNA algorithms. More precisely:

1) Neural Networks MLP backpropagation. They were utilized in the classification of spectra from an assembly of training variables, which resulted from a prior morphological analysis of the same variables. At this point is fundamental to include a sensibility analysis of the parameters obtained from the bases of specific knowledge developed in the project.

2) RBF (Radial Base Functions Neuronal Network) The estimation of physical/chemical properties can be seen as a problem of non-lineal approximation, in which we have data affected by noise (even some absence of data in the series). The more common, and classical approximation, consists on carrying out a functional regression. To do this is necessary to assume a specific function that express, the best way possible, the relationship between dependent and independent variables. In the case of RBF networks, it is not necessary any assumption about the functions that relate output wit input. The basic idea is to centre radial base functions around the data to be estimated, one of the most utilized functions is that of the gaussian type:

where ci and pi are the centre and width of the function i. Thus, the exit of the neuronal network can be written:

So that in the training process one must estimate the centroids, the amplitudes of the gaussians and its variance; from the entrance/exit patterns: f (xi) = yi. This way, the problem is comprised of a lineal part (estimation of amplitudes) and a non-lineal part (estimation of centroids and variances). The main problem with this type of networks is the growth in the number of neurons, as a function of the dimension of the entrance.

We have ran different simulations with non-concluding results as more testing needs to be done.

We have selected a nitrogen laser of medium power, a device to measure the spectral power that has been adapted to the spectrum where we expect to have the practical totality of results, a portable computer for future needs to transfer the equipment, and the necessary fungible material. Likewise, we are making use of general-purpose electronic instrumentation, among which we have an oscilloscope with four analog channels and sixteen digital channels, with a sampling capacity for analog signals of two gigasamples by second. A section in the laboratories of the Department of Photonic Technology has been destined for this end.

The platform that is being put ready has been schematised in the figure 4: A keg will be the container of the substances to be characterized. It will be able to contain any type of contaminant, with or without water, and the contaminant can be placed at the bottom or in flotation. A laser transmitter throws its pulses on a mirror that projects the radiation on the keg. A system of conventional lenses and GRIN will collect and insert the radiation returned by the keg in a fibre optic. Finally, the fibre optic, through a joint, introduces the radiation in a device that measures de spectral answer, whose data will be visualized in a computer with processor Pentium IV. The control system is in charge of synchronizing the emission of pulses with the collecting of the spectra, before and at the moment of each emission. Likewise, we will determine the times of integration of the signal in the spectra analyser. All control parameters will be established by means of computer.


The whole system has been tested, having obtained a correct operation.

Through the Fuel Laboratory of the University of A Coruña, we have acquired the necessary contaminant samples to carry out their characterisation. These samples are present in different states, determined by their stay in marine water for a predetermined period of time.