These photos were taken during a soccer event in Italy in May 2008. 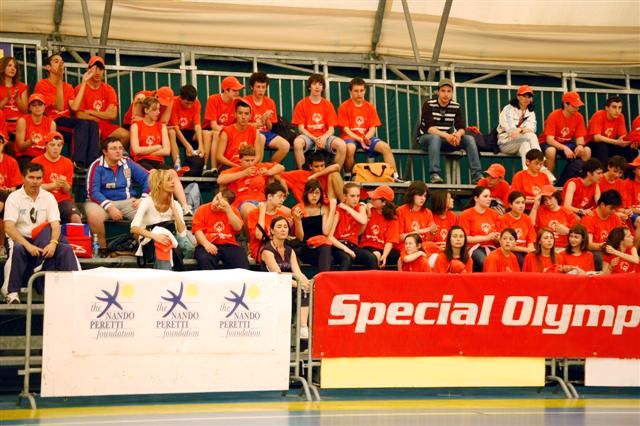 Thanks to the collaboration with the Nando Peretti Foundation, Special Olympics Italia was able to spread its message of social inclusion also in the Marche Region. In fact, for the first time it has been possible to involve this territory, especially schools and associations, also thanks to the help of the regional committee of the Italian Football League and the Province School Office. 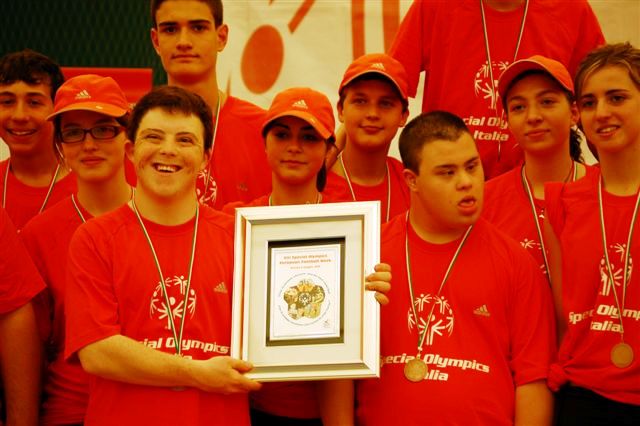 Several meetings have been organized with all these realities in order to show Special Olympics mission and its unified sports program. Unified sport foresees the participation in the same team of athletes with and without intellective disability. The answer of the Marche territory was very positive, to such a great degree that it was decided to organize in Ancona the main event celebrating unified sport: the European Football Week, a football tournament held in 50 Eurasian Countries at the same time.
For the first time in Italy, the European Football Week has been organized contemporaneously in three different towns: Rome, La Spezia and Ancona, in the week 3-10 May 2008. The press conference launching the European Football Week was held by the head office of the Italian Football League (FIGC) in Rome and was attended by the Special Olympics Italia Co-board Chair, Alessandro Palazzotti, the FIGC President, Giancarlo Abete, the FIGC Vice president, Demetrio Albertini, the Italian Paraolympic Committee (CIP) President, Luca Pancalli, the actress Nancy Brilly, godmother of the event and many Special Olympics Athletes.
On May 9th, the federal venue "G. Paolinelli" in Ancona hosted the Marche stage of the Euroepan Football Week, 15 primary and secondary schools, for a total amount of 410 students with and without intellective disability, took part in this event. For a day all these young people gathered together in teams and, with Special Olympics technicians' help and their remedial teachers and PT teachers' support - trained by specific courses in the previous months - played unified football through agilities, ability tests and training.
About 150 students were also involved as volunteers.
The various teams were awarded by the President and Vice President of the Amateur National Football League, the Province Coordinator for Schools, the Marche CIP President, the former football player Massimo Cacciatori and the Region President of the Coaches Italian Association. Every athlete and volunteer was given a t-shirt with the Nando Peretti Foundation logo and a cap, while each school was given a plate to remember this beautiful event.
21 teams of the major and bush leagues adhered to the EFW support campaign advertising the event through their websites. Some examples:
Football League site: http://www.specialolympics.it/doc/Lega.jpg
FIGC site: http://www.figc.it/it/204/18594/2008/04/News.shtml
AS Roma: http://www.specialolympics.it/doc/Roma.jpg