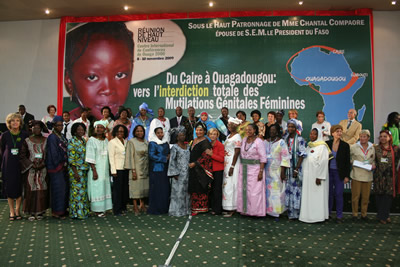 The Conference "From Cairo to Ouagadougou: towards a global ban of female genital mutilation" was held in Ouagadougou, Burkina Faso, at the International Conference Centre "Ouaga2000", on 9-10 November 2009. An opening Welcome Dinner took place on 8 November, to which participated all the international guests as well as some national participants invited by the Ministry of Social Action and National Solidarity.
NPSG has extensive experience organizing such events, which have formed a key component of the campaign NPSG has conducted over the past eight years.
Within the context of such conferences, government representatives are encouraged to speak openly about the subject, to compare different strategies, issues and approaches and to compare and discuss both at country and regional level the best strategies to ban FGM. They are also an ideal environment in which to create new relationships and networks and to provide legitimacy and prominence to the work of activist in the field. They also have significant impact in conveying to a wider public information regarding cultural change underway in regards to the practice of FGM, thanks to considerable media coverage and important testimonials by First Ladies, ministries, well-known religious leaders and other influential opinion-leaders.
Over the past six years NPSG has organised conferences in Cairo, Nairobi, Djibouti, Bamako, Asmara and Khartoum, through which it has consolidated an approach which allows participants to work towards clear outcomes in an effective and productive environment. 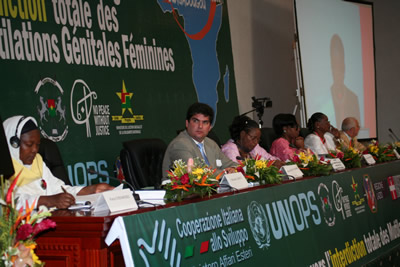 The results of the High Level Meeting were unanimously approved by all participants. The governmental representatives strengthened their engagement and their strategies against FGM both at the international and regional level, while members of civil society enhanced their profiles with colleagues in the region while building a wider network of contacts. Elements on which all participants agreed were the need to harmonize legislation at a regional level and to conceive of the law as an instrument promoting cultural change, as well as to enhance the use of the media and communications technologies to spread information to a wider public.
The methodology used in the working sessions, limiting formal presentations both in number and length, allowed for the development of vibrant discussions, drawing in all participants and encouraging real depth in the exchanges amongst them. The event had considerable resonance at local, regional and international levels, due to strong outreach to the media by the NPSG team.
The decision to hold the Conference in Ouagadougou despite the national emergency following the September flood (and the subsequent lack of Government resources to fund it), in the end proved to have been the right course of action: the Conference provided participants with the opportunity to send an unequivocal message regarding the need to undertake serious action to enact effective legislation banning FGM, and more broadly demonstrated that the human rights of women are too important to postpone addressing. 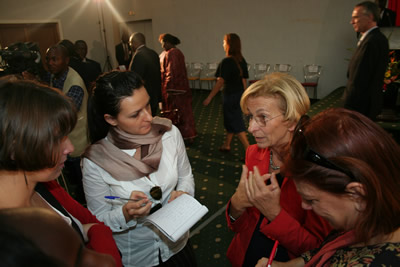 One of the Conference's aims was to give to the local population a better view of the Burkinabe Government's commitment to combat FGM and of the increasing number of African countries which have pledged to fighting the practice. To this end, the opening ceremony was not only broadcast live on the national network (RTB) but all the country's key media were involved (Canal 3, L'Observateur Paalga, Sidwaya Quotidien, Le Pays, Savane Radio, Radio Jeunesse) including the radios communautaires (Salankoloto) (networks broadcasting in local languages). During the Conference space was also given to regional artists, who through their songs and dances, gave artistic expression to the rejection of the practice.
International media which covered the Conference included: Africable, active network in the region, Daily Champion (Nigeria), Africa News (Ivory Coast) and European media (BBC, The Independent, AFP) and in particular the Italian ones (Il Corriere della Sera, Il Secolo d'Itala, Il Velino, Il Messaggero) aimed at raising awareness also within immigrant communities in Italy.

The Conference was structured in three stages: an opening session with the message of the authorities present as Heads of Delegation and First Ladies, three parallel thematic sessions focused on discussions, and finally a closing session focused on the reading of the final declaration and recommendations.

The themes of the Conference were discussed in three parallel sessions which produced recommendations subsequently accepted in plenary.
The three themes were as follows:
FGM as a global issue: the importance of legal frameworks and harmonization of National legislations in Africa
The effectiveness of the law
The potential of media in the fight against FGM

Starting in June 2009 a NPSG team led preparatory work according to a workplan, in which the main operating activities were:
Preparatory missions in July 2009: run both in Burkina Faso and in Senegal, as well as in other countries of the region (Mali and Gambia). The main objective of these missions was to urge other countries to carry out preparatory activities (i.e. national workshops) related both to the participation to the Conference and to drafting legislation. The missions to Burkina Faso had instead the objective of participating in the setting up of the organizational committees, to reinforce the Government's will to undertake the initiative, and to identify logistical issues linked to the preparation of the Conference.

Contact of international participants, invitations and confirmations: this phase was conducted by NPSG from its offices in Brussels and Rome for all the participants, except for the First Ladies, who were directly approached by the Protocol office of the President of Burkina Faso. The flooding that hit the Burkinabe capital in early September delayed the sending of the official letters and required an intense recovery work in September and October.

Finalizing Mission October to November 2009: A part of the working group (average of 4 persons) moved to Ouagadougou, and worked with the Organisation Committee, focusing on both the logistic aspects and the contents of the Conference.

High Level Meeting Development: The NPSG team was composed of about 10 people and operated during the week before the Conference and during the Conference itself to support all stages of the event, including setup of technology infrastructure, media coverage, logistics organization and document production.
Accounting and Reporting: The activities of accounting and reporting have been a continuing effort throughout the project implementation, but intensified after the conclusion of the Conference in order to be able to close all contractual relations before the NPSG team left the country and so as to produce a comprehensive report.