Timeline of the present activity report: From June 2009 to February 2010 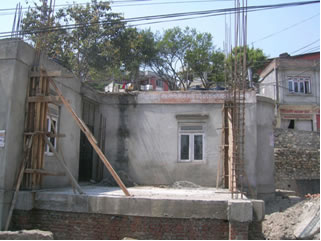 The construction of a new Center for Health and Education in the neighborhood of Kumarigal / Maijubahal in Kathmandu began building in time, according to the project.

In 2009 the first floor was completed, starting to proceed with the works of the second floor, interior finishes (walls and stairs) and all the carpentry, plumbing and sanitation, painting and electricity, as well as external finishes (walls).

Thanks to the transfer agreement signed with the Municipality of Kathmandu Amics del Nepal (AdN) managed to get a social involvement that includes all the inhabitants of the neighborhood, waiting on the completion of works to be able to use the building.
Monitoring and evolution of the work is measured from the daily visits made by the project coordinator of Mitra Kunja Nepal, the members of the board of neighbors, as well as regular visits by members of the board of the district.

AdN identified the need to incorporate a small area to the construction, on the side of the rear floor. This space would have been useless and AdN wanted the square meters that had been lost with the reduced surface of the tower due to the proximity of the limit street.
It was necessary to demolish the pre-existing foundation to begin the works again.
It was also confirmed that the current building was constructed on a site that had previously been a landfill stream, so it was necessary to dig deep enough to reach soil foundations before starting the construction of the new floor.
It was also necessary to change the course of the sewer pipes, although the work did not involve a serious excess of work and budget as it is simple infrastructure in this country.

The main risks to finish the project within the deadlines may be due to the lack of supply of the necessary construction materials, because of the insecurity and transport strikes that occur regularly in the country. This may cause inactive periods of construction, which could extend the date of completion of the project. 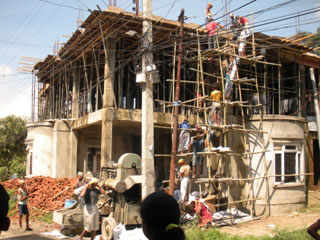 Monitoring and evaluation of the project

The monitoring of the project has been carried out directly by the general coordinator of the local counterpart, from weekly visits to works, as well as the monitoring of the expenditure incurred.
The architect author of the project has done the direct supervision of the works and has given the indications of the necessary works to local contractors for its implementation in detail. The assessment and quality of construction has been developed by the local board of the district, along with the general coordinator of the local counterpart, which are above the construction process and all the details involved.

Evaluation of the intervention 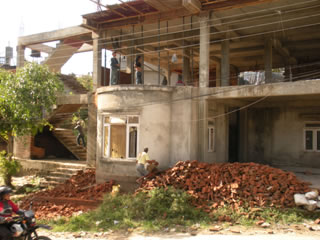 The project is of great importance for the neighbours of the district, as it will be the first Primary Care Center for Health which has a specially designed equipment for this purpose. It is very important that this land belong to the municipality and it was donated for the construction of the building.
The project has a second phase consisting in the construction of a second floor where the educational classrooms will be located, especially the Women Literacy Program groups. This Women Literacy Program is being managed by the local counterpart, with excellent results.
Once the project is completed, AdN will develope the social, educational and health programs for the district of Maijubahal / Kumarigal in the same building. In the district of Maijubahal live more than 35,000 people, most of which have a low economic level, with serious deficiencies in education and healthcare. This center will improve welfare for the whole population of the district.
The fact that the building is located in a central area of the district, with great visibility, will strength the role of social facilities. This is one of the objectives that our organization has wanted to achieve in the community, so the use of the center will benefit the entire population of Maijubahal. AdN is confident that the inauguration of the facility will become an act of special significance for the neighbours of the district and will also impact the capital of the country.