TIMELINE OF THE PRESENT ACTIVITY REPORT: From January 2011 to June 2013

Idiopathic Nephrotic Syndrome is a rare kidney disease characterized by the excessive loss of protein through the urine. Each year, 2-4 children out of every 100,000 under the age of 14 years are diagnosed with Idiopathic Nephrotic Syndrome. Cortisone therapy "cures" 90-95% of these children, however around 80% of them will have at least one relapse in the 2 years subsequent to their first episode and 40-50% will have many relapses, meaning they will need to take frequent courses of cortisone and other immunosuppressants.

The ideal dosage of cortisone, that is the dosage which gives maximum protection from relapses with the fewest side effects (obesity, high blood pressure, retarded growth, osteoporosis) has not yet been defined.

In order to better understand how first episodes of INS were managed in Italy, 3 years' worth of data was collected from the Pediatrics Departments of hospitals located in the following 9 regions of Italy: Lombardy, Emilia-Romagna, Tuscany, Apulia, Sicily, Marche, Trentino- Alto Adige, Friuli Venezia Giulia and Sardinia. Data relating to 231 children who had their first episode of INS between 2007 and 2009 were analysed. From this analysis, it became evident that there were large discrepancies as far as the therapeutic approach was concerned (dosage and length of cortisone treatment, but also regarding the other drugs used to treat this illness and its complications).

A therapeutic protocol (6 months of cortisone therapy in gradually decreased doses) was developed on the basis of the abovementioned analysis and was adopted by all 9 regions involved in the prospective study. In addition to evaluating whether this method of treatment leads to improved clinical results, and therefore fewer relapses, the following aspects are also being studied: the economic and social burden of the disease, changes in children's behaviour as a result of the illness and its therapy, changes in the children's quality of life and the role genetics plays in their response to treatment.

By May 2013, 143 children with Idiopathic Nephrotic Syndrome had been recruited. All the clinical and laboratory data relating to these children are collected anonymously during the various check ups and uploaded into an online database (www.nefrokid.it). The timetable for check ups, tests and follow-up examinations can be seen in Figure 1. At the end of the observation period, the entered data will be elaborated and the results will be compared to those obtained from the retrospective study. 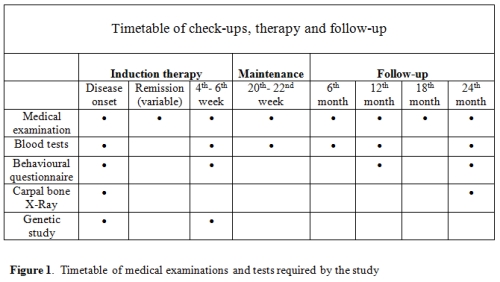 So far, 74 children have completed the genetic and pharmacodynamic (how the body reacts to drugs) study. The blood samples (which, for one of the studies, needed to arrive at the laboratory fresh, i.e. within 16 hours) were sent to the Genetics Laboratory run by Pofessor Giuliana Decorti (Dipartimento di Scienze della Vita di Trieste) by courier.

The evaluation of how cortisone affects the behaviour and quality of life of children with INS. Both parents and the older children participating in the study were asked to complete a questionnaire at pre-established intervals during the study period (0 - 30 days - 6 months - 1 year - 2 years). These questionnaires were then posted by the various doctors responsible for the study in each centre. Dr. Catia Giovannini (psychologist) is collecting the questionnaires and will evaluate the results and compare them to those obtained from the analysis of the patients' clinical and therapeutic data.

To date, none of the children enrolled in the study have completed the 24-month follow-up period after the suspension of treatment, as the first children to complete their follow-up will finish in October 2013. However, preliminary data from a restricted group of 37 patients who have completed 15 months of follow-up (Figure 2) is available. The initial findings suggest that the percentage of children suffering a relapse appears to be reduced compared to data from the retrospective study, but enough information is still not available to be able to draw any definitive conclusions.  Results from the genetic and behavioural studies are equally as preliminary. 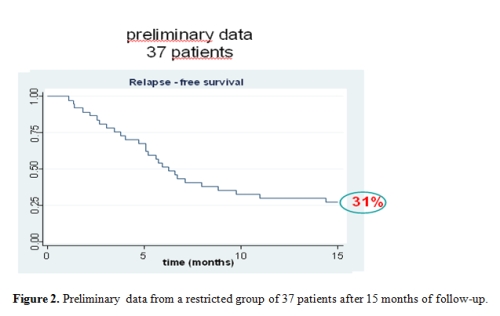 Patient enrollment will continue until December 2013; from this point, a further 2 years of follow-up will be necessary to complete the evaluation of the effectiveness of the treatment in all the children involved. After this, the next important step will be to individualize the children who suffer from frequent relapses or those who are "cortisone dependent". For these subjects, who will need to take a second immunosuppressant in order to prevent relapses, specific therapeutic protocols will be defined. It is hoped that some very interesting results from the genetic study and the cortisone pharmacodynamic study will also be obtained.

A very pleasing result was that obtained during a consensus conference regarding this study which was held in Bologna at the end of June 2013. Representatives from the most important Italian Pediatric Nephrology departments participated in the idealization of a common therapeutic protocol for the treatment of a first episode of INS to be used all over Italy and to lay the foundations for the development of further nationwide studies.

The data, database and protocol of this clinical triaI can be found on the following website: www.nefrokid.it

think global, act local
ABOUT US| CONTACT US| LOGIN| PRIVACY| LOGOS
you are here: Home  > Projects:  Medical research or Europe  (or Both)  > 2010-72  > Interim Report
Project links: