Investigation on the role of apoptosis in aneurysm rupture

Cerebrovascular diseases represent one of the most relevant causes of morbidity and mortality. About one-quarter of these diseases are reported to be caused by subarachnoid haemorrhage (SAH) from ruptured intracranial aneurysms (IAs). SAH has a great social relevance, among patients, 50% die at the time of aneurysm rupture or shortly thereafter, and 25% suffer permanent disability. Intracranial aneurysm growth and rupture represent the end-stage of a progressive alteration of intracranial arterial walls, depending on factors presently unknown, whose identification appears fundamental. Our preliminary investigations demonstrated how apoptosis, a genetic program of cell death, appears clearly enhanced in ruptured aneurysms, sustaining the hypothesis that apoptotic phenomena could play a role in aneurysm growth and rupture. It is here proposed  a  comparative  evaluation of gene expression in ruptured and  unruptured aneurysm specimens, in arteries obtained from the same patients as well as from control arteries, obtained from patients operated on for intracranial non vascular malformative disease. The management of aneurysms could be dramatically improved by identifying genes involved in aneurysm growth and rupture clarifying the real factors responsible of such pathology. Our research project represents an innovative and original approach in understanding the complex aspects of intracranial aneurysms aetiology and in improving their management. 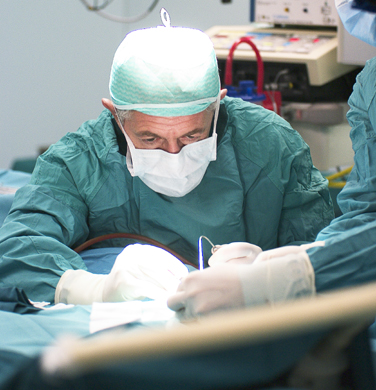 Aims of the project and research steps

In the first phase, the aim of our study is the  analysis of gene expression patterns on all collected tissue and blood samples. Our expectation is to find different gene expression patterns between normal and pathological cases and between different moments of aneurysm pathogenesis, in order to identify genetic patterns indicating the enhanced risk for their rupture. Again it is investigated the possibility that peculiar genetic expression in peripheral arteries may be indicative for the risk of rupture in a  subject harbouring an unruptured intracranial aneurysm.

In the second phase, after the detection of a pathologic gene expression pattern a genomic approach will be developed in order to study the correlation with known mutations or new mutations of target genes linked with connective tissue disorders. Mutation detection techniques will also be employed to study genes that showed to be specifically over-expressed or repressed in aneurysmal dilatations, in order to identify new mutations and genetic markers.

The study was performed in co-work  with the colleagues of the laboratory of molecular genetics at the Institute of Human Anatomy and Cellular Biology of our University. Our work was targeted in a preliminary phase of evaluation of RNA gene expression in aneurysm, cranial artery of aneurysm patients and cranial artery in non aneurysm patients. A total number of 9 cases have been studied including two cases of non aneurysm patient in which the temporal artery was analyzed. Peripheral blood samples in aneurysm and non aneurysm patients were collected. The purpose was to detect whether abnormal expression of specific genes may be a reliable factor in identifying in an otherwise healthy subject, the presence of an unruptured intracranial aneurysm and the genetically programmed risk of its rupture. In brief, pathological specimens from aneurysms were collected at surgery. After the aneurysm clipping by standard neurosurgical techniques, and the verification  of its complete exclusion from brain circulation, aneurysmal dome was resected only in cases in which the operating neurosurgeon will feel it as a completely safe procedure. To study comparatively gene expression patterns between aneurysms and peripheral arterial vessels, during the surgical approach, specimens of temporal superficial or of middle meningeal arteries were also collected. For the study of arterial specimens, the same procedures used for aneurysms, and here described, were adopted. Aneurysmal specimens were immediately pre-treated in the operating room eliminating from their surface blood clots. After their collection, specimens were immediately putted into liquid nitrogen (-162°C) for their temporary storage during the transport to the laboratory and stored subsequently at -80°C for the temporary storage before the analyses. RNA and DNA extraction was  performed within the following 24 hours. 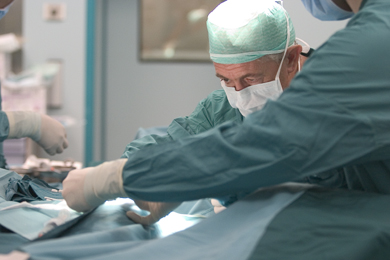 A retrotranscription reaction from mRNA to cDNA was performed and the obtained cDNA was subjected to hybridisation on DNA chip according to microarray technology.

The DNA-chip set up was demanded to Affymetrix service that customized specific chips for our items. Data collection and bio-informatic data organization was realised by a bioinformatic specialist who is calculating index of gene expression for each probeset using dedicated algorithms.

In the second phase of the study, mutation detection will be performed by DNA amplification with specific primers and by denaturing high-performance liquid chromatography (DHPLC) technique followed by direct sequencing with Big-Dye Terminator method.

The preliminary results seem to indicate a relevant role of the gene coding for nitric oxide synthase (iNOS), an enzyme primarily involved in arterial tone regulation.