Short description of the project goals:

3. Maintenance of the Diaspora Portal - administration and maintenance and providing help for users

Visual identity of web presentation, users and administrative interface were created. The Objective 1 was implemented through 2 phases:

In June 2012, BI-FAZ agreed with the company Thin Tank Consultant (further in text referred to as TTC) the general appearance and design draft of the first page and subpages of the Portal.

Upon discussing the development of the project with TTC, the BI-FAZ realized that while constructing the web portal and layers for the Diaspora Portal, it would be possible to construct the entire Academic Portal at the same cost, to include not only the Diaspora Portal (Doctoral dissertations by BH nationals resident abroad), but also the other 2 sections/repositories envisaged for later stages of the project.

BI-FAZ produced Detailed Draft of the Academic Portal of 17 pages where the appearance (interface) and usage of the Portal is described, supported by relevant examples of other portals and web pages with similar purpose.

Phase 2 lasted longer than it was expected and planned. It consisted of two main actions:

The demo version needed improvements in many sections. For this purpose BI-FAZ created 3 files of instructions for adjustments.

Other activities were related to:

- BI-FAZ reserved Web domain for the Portal (znanstveniportal.ba,) at UTIC

- The NPF's logo added on the web site of the BI-FAZ in the Portal section http://www.bosnjackiinstitut.ba/home/sadrzaj/191

ACTION 2 - Creation of the final version of the Portal

Corrected demo version of the Portal was finished in December 2012, tested and analyzed by BI-FAZ. Due to errors in user registration, researching database and in uploading doctoral thesis, additional work was required. BI-FAZ made and forwarded additional 14 files of instructions for adjustments to TTC by December 2013. Files included:

- requests specified in the Draft of the Portal, which TTC did not include in the demo version

Methodology of this stage of the project required verifications by BI-FAZ of all programmed and designed items which were applied on the Portal.

In August 2013 TTC engaged new programmer, with whom it was possible to communicate problems (especially important items like research of database and linking metadata) and complete specified instructions until December 2013.

In December 2013 the final version of the Portal was completed without errors. Final version enables usage of all segments of the Portal without any obstacles: registration, upload of a dissertation and research database. Since January 2014, the Portal is accessible at www.znanstveniportal.ba and open for scholars from Bosnia and Herzegovina and abroad. User's manual was created for the users of the Portal with instructions and explanations on how to use the Academic Portal.

1. Final version of the Portal completed, accessible at www.znanstveniportal.ba

2. Draft of the Portal designed

3. Texts about the Portal, Terms of use, Registration, Sponsor and about repositories produced in Bosnian and English

4. 14 instructions for adjustments made for corrections

6. One doctoral thesis already uploaded to the Portal

1. The Academic portal with 3 repositories was created, of which the BH Academic diaspora Portal is an integral part.

Promotion of the Portal consisted of the following activities:

- Designed promotional materials of the Portal, leaflets and posters in Bosnian and English (January - February 2014)

- Created mailing list of scholars abroad, former users of the library of the BI-FAZ, potential users of the Portal

- Promoted Portal through web site and in the library of the BI-FAZ (May 2014.)

- Promotional material exhibited at the conference "Meet, See, Do 2" (MSD 2), in Tirana, Albania (April 2014.) organized by the CHwB

35 in Bosnian and 45 in English. Each shipment consisted of: 1 poster B2 or A3, leaflet and invitation letter.

3. 27 scholars, former users of the library of the BI-FAZ informed about the Portal by e-mail

4. 80 participants of the conference MSD 2, museum curators and heritage experts from Serbia, Croatia, Albania, Montenegro, Kosovo, Macedonia and Bosnia and Herzegovina informed about the Portal through exhibited promotional material and one-on-one conversation

5. cca 100 current users of the library of the BI-FAZ and all visitors (cca 14000 / year), informed about the Portal through exhibited posters in the Institute

1. Promoted the Portal at MSD 2 conference in Tirana

Maintenance of the Academic Portal consists of the following:

2. From July 2014 hosting and backup will be provided by Host Europe, technical support and maintenance by TTC

1. Reserved web domain for the Portal until October 2014

3. Provided hosting and backup for the Portal by Host Europe 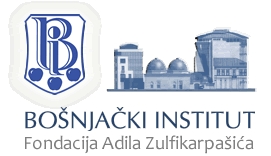