Fellowship for a research study on "No bioavailability in preeclampsia"

Pre-eclampsia is a disorder unique to pregnancy affecting both the mother and the fetus. Hypertension, proteinuria and edema are the most common and well-known maternal clinical symptoms. The incidence is approximately 6-8%. Pre-eclampsia is one of the leading causes of maternal and fetal mortality and morbidity associated with pregnancy throughout the world. The pathophysiology is unknown, at present, the most effective treatment is immediate delivery. During the last years our studies contributed to demonstrate that the vasodilator nitrc oxide (NO) is important for a correct placentation and that inadequate production of NO in the placenta may be responsable for the high resistance state and the ineffective placentation of pre-eclampsia. The aim of this study is to evaluate the biochemical mechanisms involved in the inadequate production of NO in pre-eclampsia.

Three groups of age-mached patients are included in the study: normotensive pregnancy, preeclamptic pregnancy and non-pregnant women. The Institutional Committee Review approved the study and all participants gave informed consent to study. In this study gene expression analysis by real-time PCR, immunoistichemical analysis with specific antibodies and analysis of aminoacid concentration by HPLC will be performed in placental tissue and in blood samples.

The Mario Negri Institute's previous studies demonstrate that less nitric oxide (NO)- dependent vasodilation and an excess formation of reactive oxygen species could explain poor placenta perfusion in the pre-eclampsia. The researcher will test the hypothesis that reduced NO activity and increased oxidative stress in preeclamptic placenta is related to a low bioavailability of L-arginine, the NO precursor.

Introduction
In the past few years evidence has accumulated suggesting that nitric oxide (NO), a potent endothelial-derived vasodilator, might be implicated in gestational vasodilation. NO is synthesized from the aminoacid L-arginine by a family of enzymes, the NO synthases (NOS). While human placenta does not form inducible NOS (iNOS) nor neuronal NOS (nNOS) mRNAs and proteins, the endothelial isoform of NOS (ecNOS) is actually detectable in healthy placenta and is localized to the endothelium of the umbilical cord, chorionic plate, and stem villous vessels. Conceivably, locally formed NO serves to maintain low vascular resistance besides attenuating the action of vasoconstrictors. Less nitric oxide (NO)-dependent vasodilation and excess formation of reactive oxygen species could explain poor placenta perfusion in preeclampsia but the pathways involved are unknown. We tested the hypothesis that reduced NO activity and increased oxidative stress in preeclamptic placenta is related to a low bioavailability of L-arginine.

Aims of the study
The present study was designed: 1) to test whether lower placental NO bioavailability of preeclampsia is due more to increased NO degradation to peroxynitrite than to low ecNOS expression or activity; 2) to investigate whether excessive peroxynitrite formation is related to a low bioavailability of the NO precursor L-arginine and to find out the biochemical determinants of that.

Methods and results
Three groups of age-mached patients are included in the study: normotensive pregnancy (NP, n=13), preeclamptic pregnancy (PE, n=11) and non-pregnant women (n=6). The Institutional Committee Review approved the study and all participants gave informed consent to study.
We first analyzed placental endothelial NO synthase (ecNOS) expression (by immunoperoxidase) and activity (by diaphorase) and we found that the levels were comparable in normotensive pregnancy and in preeclampsia, while nitrotyrosine staining, a marker of peroxynitrite was stronger in preeclamptic villi.
We also documented oxidative tissue damage in preeclamptic villi by strong 4-hydroxynonenal-lysine staining (by immunoperoxidase) which closely co-localized with nitrotyrosine (Table 1). 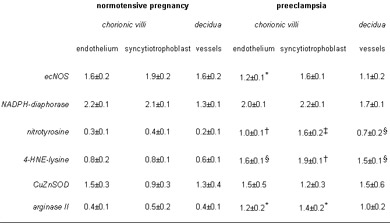 To test the hypothesis whether the excessive peroxinitrite formation is related to a low bioavailability of L-arginine, we evaluated concentration of the NO precursor L-arginine (by HPLC) in umbilical blood and in villous tissue. The levels of this aminoacid were lower in preeclampsia than in normotensive pregnancy (Fig.1) 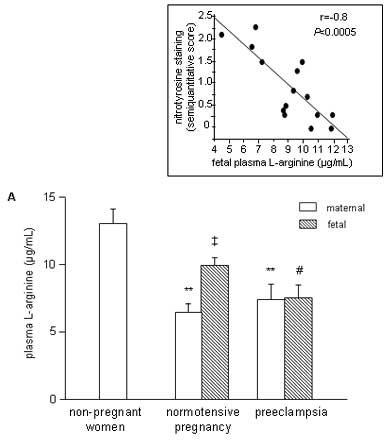 This was not due to a defective L-arginine transport since gene expression of the CAT-1, 4F2hc and LAT-1 cationic aminoacid transporters (by real-time RT-PCR) was normal (Fig 2). 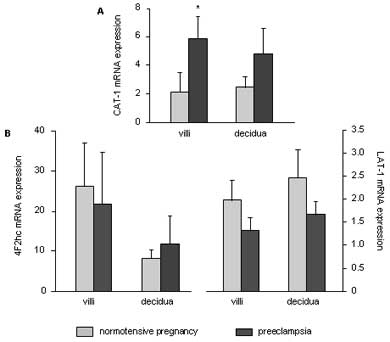