Dendritic cells (DCs) are specialized cells of the immune system. These cells migrate into lymphoid organs, particularly the thymus. The thymus is a lymphoid organ crucial for the development of the immune system that defends the organism against infections, but also drives the rejection of allograft.
A particular molecule denominated CCR9 has been shown to be a receptor for the CC chemokine TECK, a chemokine expressed by thymic cells. CCR9/TECK pairing has been shown to be important for cell homing. Hence, in this work we planned to enhance the migration of DCs into the host thymus to favor the development of donor-specific transplantation tolerance.

Aims
Transfect dendritic cells with gene encoding the CCR9 molecule and evaluate the effect of DS transduction with the CCR9 gene on their homing to the thymus and their ability to induce allograft tolerance.

1. CCR9 gene preparation
CCR9 gene was cloned in E. coli. The obtained sequence was submitted to GenBank. After cloning, adenoviral vector containing the cDNA for CCR9 was generated.

CONCLUSION
Trasfection of DCs with CCR9 gene keeps them in a less immature state than transfection with a null adenovirus. Specifically, they express lower levels of MHCII and B7-2 and have a reduced capacity to stimulate allogeneic T lymphocytes.

PERSPECTIVES
We envisage to infuse donor CCR9 gene transduced -DCs into the recipient to induce tolerance to a subsequent immune incompatible kidney allograft . 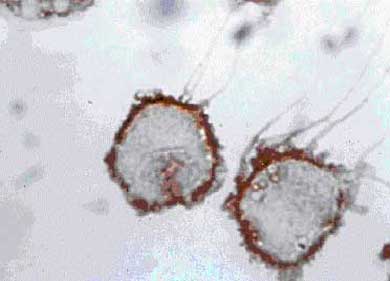