Agriculture and Environment: the New Challenge 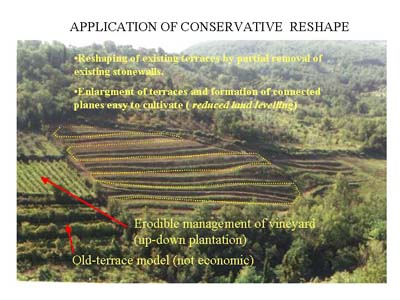 The Department of Economical Science of the University of Florence is following a research plan for the identification of forms of governance in the rural areas that allow the concrete applicability of the concept of sustainable development, especially in relation with the conservation of biodiversity and landscape.

In order to achieve the objectives and in order to offer interesting concrete starting points for the development of methodologies and operational instruments for the management of rural areas, the Organisation intends to integrate the results obtained with the project called "Definition of a common European analytical framework for the development of local agri-environmental programmes for biodiversity and landscape conservation (AEMBAC)" recently concluded as part of the scientific research programme of the European Union, co financed by the Nando Peretti Foundation, and coordinated by the IUCN together with other 7 european universities.

Considering the amount of work to do and the competences gained by the researcher Dr. Riccardo Simoncini for the assigned research project "Analisys of the agro-environmental and rural systems and impact of policies for the conservation of environmental resources and biodiversity", the Department decided to reconfirm the research assignment that allowed to obtain interesting scientific results, which have been presented the 5th of February 2004 to the European Parliament in Brussels and in Grosseto the 28th of January 2005.

The sixth environment action programme (2001-2010) of the European Community (EU Commission, 2001), has recognized the importance of addressing environmental objectives by different economic sectors.  The Gotebörg European Council (2001), where the EU Heads of State committed themselves to halt the loss of biodiversity by 2010 and made this a goal in the European Union Strategy for Sustainable Development, recognized also that the Common Agricultural Policy (CAP) should contribute to achieve the sustainable use of natural resources. The recent  reform of the CAP (2003), has promoted a shift of importance between production and rural development by transferring funds from the first to the second pillar, and by introducing compulsory cross-compliance which is linking direct payments to farmers to the respect of environmental and other requirements. This is on line with the promotion of the European model of multifunctional agriculture which, beside the production of food and fibre, recognizes also the importance of social and environmental aspects to be dealt with by agricultural activities.

In order to achieve the objectives above there is a need for tools and instruments to allow European regional administrations, to develop, implement, manage and monitor rural development plans.

The project co-funded by the Nando Peretti Foundation, following up the research carried out during the past year, addresses the above issues with a direct and interdisciplinary approach, by developing operative tools and instruments, to be implemented by regional and local public administrations in order to achieve conservation of biodiversity while developing rural development plans.

The research carried out during the past year has achieved important results, such as the development, in collaboration with scientists of diverse disciplines, of a computerized decision support system, based on the AEMBAC methodology, to develop sustainable rural development plans. This operative instruments has been introduced to the administration of the Veneto region, who has proposed a project of implementation of this instrument to develop agro-environmental measures for the Veneto region.

Also the Tuscany region has been contacted and discussions are ongoing with officers in order to see what could be the feasibility of adopting this operative tool also in Tuscany.

The objectives of the project were the following:

think global, act local
ABOUT US| CONTACT US| LOGIN| PRIVACY| LOGOS
you are here: Home  > Projects:  Environmental conservation or Europe  (or Both)  > 2000-04  > 2006 Project Description
Project links: