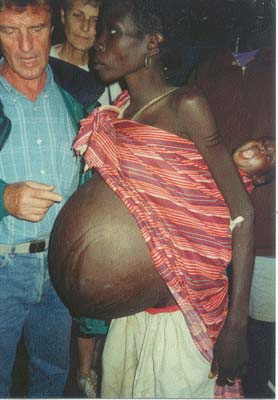 The growth of the population in the Boma region has generated a significant increase of medical needs.

Boma and its surroundings have more than 50,000 inhabitants. This number is in constant progression, due to the prosecution of combats, to the rainy season not yet ended that creates difficulties in providing supplies, the sedentarisation of the people and the reigning insecurity.

Taking the responsibility of a medical project in Southern Sudan, even if as modest as Boma, bears many difficulties:

For this reason in a first moment the purchase of vehicles had been planned, thank to a personal grant of Miss Peretti. Then, for economical reasons, it has been decided to fix the existing 4x4 (purchase of an engine, a new radio equipment, tires, etc.)

The problem of drinking water still exists, despite all the efforts. 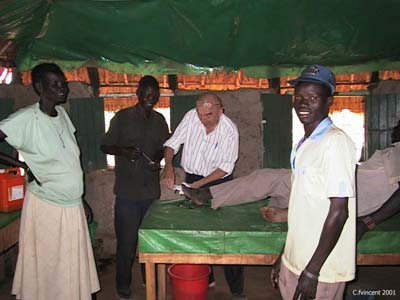 Medical care and training of the local people
Despite all the warnings, the majority of the population ignores the dangers of drinking polluted water and of using it in household work or in agriculture; also numerous cases of parasitosys and other digestive pathologies, mostly among the young children, could have been avoided if the information would have been followed.

Constraints due to the low level of medical staff: The majority of the medical staff didn't receive complementary training.

Among the local population only some Murlé went to primary school, and very seldom secondary schools (Ethiopia).

The Jiés and the Kachipos are analphabetic. It is therefore difficult to find medical assistants or local nurses like young people with a correct knowledge of English able to receive a vocational training.

Constraints due to the lack of organisation of the local community: in spite of the creation of a civil authority (SPLM) and the presence of SRRA the association is left alone without any local responsible or valid interlocutor.
Because of this there is a lack of participation of the employees paid by the Association and of the community.
There is no health committee in the village and the action of the women committee is reduced.
The projects food for work proposed by the WFP have not been concretised in the region.

Consequently the contact with local authorities is reduced, often limited only to the resolution of conflicts or untimely needs. The incapacity of the community to take the responsibility of part of the program caused a strong dependency from our structures.

Constraints due to the abuses of the local population observed in the place:
Because of problems with the parachuted food aid supply, the Boma inhabitants never ceased robbery of equipment, cattle and food.
There has been an increase of robberies inside the hospital premises: stealing of medicines and medical equipment, of food, of goat herds and poultry, of vegetables, etc. after threatening with menaces the ones responsible of the logistics.

Vegetables:
They have not been planted this year
In October only manioc has been planted (seeds have been provided by the Association).
The prolonged rains in November and December helped germination.
Unfortunately no vegetables have been grown, as they would have been an important nutritional complement for hospitalised patients and expatriates.

Buildings:
The refurbishment and the reconstruction of the hospital buildings are now again a priority.

The hospitalisation and the maternity buildings are in good condition.

The others are destroyed, the external consultation and laboratory buildings are badly damaged (life of walls and roofs is limited).

The same for the expatriates lodgings have to be rebuilt.

The local authorities wish to rebuild part of the buildings in a more modern way, except the hospitalisation rooms that will remain built in the traditional way (allowing so to keep part of the local employees).

Nevertheless, in spite of the observations, this didn't prevent all persons living in Boma to benefit from a medical assistance, thank to our action.

For some access to the hospital is a matter of minutes, for others a 4 days march is necessary.

As a matter of fact it happened that wounded patients walked even longer distances. Some of them said they had marched 6-7 days.

This is the only hospital in the range of 100 km.

The justification of such action has not to be discussed. A new negotiation with the local authorities indicates the rights and the duties that everyone will have, insisting on a term for transferring competences.

(photo above) Education for women

The objectives of Doctor Pacoud's stay:

Increase the coverage of the hospital to improve the reference system in the existing health units; training of a mobile team for the more distant areas, in particular for the Jiè and the Kachipos populations.

A series of trainings for the hospital's personnel based on the MSF medical guides (.......)

Sadly bad news never come alone: resignation of the responsible of logistics, ongoing rainy season with consequent damages to or destruction of the buildings, and worst departure for serious health reasons of Doctor HETALAMI, who is still hospitalised under intensive care in France.

Official reliable medical data Pibor Country are not available, if not the general mortality rate, or mortality rate of children under 5. Nevertheless an estimation is made for which there is no urgent medical situation, a low rate of malnutrition, absence of epidemic situations in the last 4 years, absence of sleep illnesses, absence of visceral leishmaniosis, not frequent dracunculoses, onchocercosis localised north of the county near the border to Sudan.

Sudanese Medical Care (SMC) is in charge of the primary health needs. They received basic kits from OLS for health centres and units. UNICEF further reduced the number of medicaments in its kits. The supply is irregular.

The Boma hospital is therefore the only medical structure in the county that regularly in the last five years has been giving access to medicines and essential cures.

The activity is normal, with an average of 1,200 consultations and 30 hospitalisations every month.

Good coverage of children below 5 (approx. 30% of the consultations). No cases of malnutrition.

Cases of injuries and traumatisms are frequent (20%) many are linked with status of alcoholism, and many of the victims are women.
Sexually transmitted diseases are quite frequent, 10% of consultations, 20% of adult population; syphilis and gonorrhoea are common; there aren't signs evocating aids.

Liquid and bleeding diarrhoea are not so frequent (10%).

The maternity activity is also quite modest: approx. 100 pre-birth consultations and ten births every month (the fact that the doctor is a man may have influenced these statistic data, for cultural reasons).

Many consultations for minor pathologies such as: digestive parasitosis, bronchitis, influenza, etc.

The relatively modest activity of the hospital doesn't justify the need of 33 local permanent employees for the Association on the Boma site.

The majority of patients comes from Boma: sadly the hospital doesn't cover the needs of the county because of an ethnical discrimination.

Malaria: The chloroquine treatment has been abandoned. Accesses to swamps are treated with quinine. It will be necessary to start a study of chimio-sensibility to set protocols for treatments. On the same time prevention is being considered through the distribution of mosquito-nets for children below 5 and pregnant women.

Tuberculosis: at present the anti-tuberculosis programme is practically non existing. 4 patient are under cure and come every morning to the hospital to get their medicine. The resumption of the programme needs the creation of a separate building for the first phase of the treatment, a complete training of nurses, treatments in the villages and the creation of a laboratory.

Sexually transmittable diseases: the treatment of gonorrhoea is made difficult and expensive by the probable resistance to penicillin and cotrimoxazole.

Aids is one of the primary causes of death in Kakuma camp, very frequent in Ethiopia and Kenya (more than 700 daily cases). We started distributing preservatives to the ill.

The most important problem is the lack of professional training of the personnel actually employed on site, no local entity is capable of curing or managing the hospital due to a lack of qualifications.

The only ones who underwent training (ICRC nurses in Loki) decided to work for other medical structures that offered better salaries.

If the presence of a structure like the small Boma Hospital corresponds to a real need for this population's health, with the regular distribution of medicines, the presence of French medical equips, the taking care of primary and most frequent pathologies of the region, the total lack of cooperation and the need of local authorities, the encountered difficulties in managing, the systematic robberies of medicines and equipment, the growing absenteeism of the local personnel, the lack of security inside the hospital premises, don't improve at all the working conditions.

We find many difficulties in recruiting people responsible for logistics or doctors that are willing to dedicate themselves to this mission.