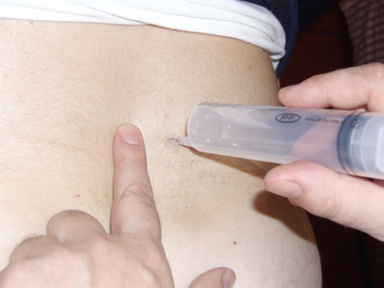 In the first four months ARACO saw sixty three prospective patients for a first visit and found fifty one patients totally compatible with the treatment.

One of the patients, already under therapy, took the decision of undergoing a surgery in any case, so ARACO was forced to eliminate her name from the project after only one therapy. Twelve patients have been judged not compatible, in ARACO's evaluation, to the therapy: seven of them have been found in poor health condition because of other pathologies, the other five have been found more suitable to an arthroprosthesis than to ARACO's therapy.

Sixty percent of the patients , thirty-one (31), requested a therapeutic approach on two articulations. Forty percent, nineteen (19), requested an approach on three articulations. ARACO provided one thousand seven hundred eighty-five therapies, (1785), based on the association of ozone oxygen infiltrations, plus omotossicologic mesotherapy, plus osteopathic manipulations. ARACO's has worked full time at these therapies during four months.

In January ARACO began the meetings for the second phase of the project. ARACO saw eleven (11) prospective patients and plans to see seven (7) more in the first decade of February. Nine of the eleven have already started with the therapy. In order to complete the project, ARACO contacted from the very first moment residential circles and meeting centers in the municipalities and the neighborhoods, and in the catholic churches too.
ARACO avoided any contact with the several circles existing in Rome belonging or close to political organizations. ARACO can affirm that the quantity and quality of the response to its proposal has been good and that in the future,  the response to the project will strengthen and improve. ARACO realized from the first meetings that people in a younger age, from fifty five to sixty five, also aspire to this kind of treatment in order to live a better life. It is something of great interest and not accounted for before.
Although ARACO's project goal -  helping people over sixty five to live a better quality and autonomy - is concrete and realistic , it is also true that the personal and social perception of  aging varies depending on the person's mobility capacity and absence of pain; depending on these factors, aging can start very early, can afflict people still aspiring to feel young.
It is early to make any final judgment about the result of the therapies, but ARACO can confirm to have found a good response in the already treated patients: they suffer less pain, walk much better, feel less dependent.

The psychological improvement noted from the first treatment is significant: patients are less moody, they do not feel  excluded from social and emotional life, from daily duties, they think of the future in a hopeful way. They also talk to relatives and friends of their good experience, this is the reason why ARACO received and receive every day several phone calls from aspiring patients living out of Rome, ready to travel to ARACO's practice and get a similar therapy.
ARACO is working on a rigorous follow-up based on scientific criteria, that will provide a more definite picture of the patients condition. This follow up report will be sent to the Foundation as soon as it is ready.
ARACO has already contacted daily papers, radio and television networks editors and reporters to inform them of the making of the project. They expressed a true interest and are ready to publish articles on the results of the project.
ARACO is deeply glad and satisfied with progress so far, and hopes to ultimate the project in the best of ways and with the best results, hopeful to have the privilege to improve the range, the quality and the goal of other projects in the future.

think global, act local
ABOUT US| CONTACT US| LOGIN| PRIVACY| LOGOS
you are here: Home  > Projects:  Medical research or Europe  (or Both)  > 2004-20  > Final Report
Project links: