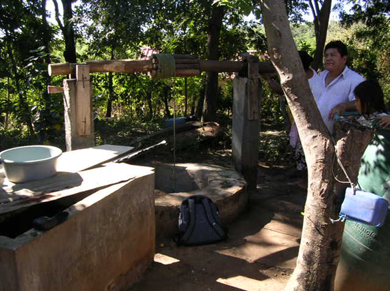 THE AIM OF THE PROJECT

The aim of the Project was to investigate the hydrogeological conditions of the involved area (difficult, due to the diffuse salinity), promote and carry out a small drilling campaign, find the right quantity of good fresh water to supply a population of about 2.500, plan the distribution system (rural aqueduct).

ORGANIZATION AND CARRING OUT OF FIELD WORK

Once the Project had been approved and the grant awarded (November 2001), the fieldwork has been organized, taking into consideration the rainy season (May/October) with frequent floods, during which period no field works could be carried out.

A general survey of the area was done in the period January - February 2002, collecting all necessary information and field maps (topographic/geological).

A senior hydrogeologist was in the Project area for nearly three months (March-June 2002), while the two Project Coordinators spent there two weeks at the beginning of the drilling campaign.

A much bigger problem than what expected was related to the high salinity of the explored area.

This fact has obliged to extend the study (and consequently the drilling campaign) further north, moving far from the Villages areas.

The hydrogeological conditions, different from what originally expected - not a water table related to the riverbed but water flowing in fractures connected with the volcanic system - have obliged more financial efforts in investigation and drilling works.

Therefore it was necessary to find other funds and cooperation in order to be sure that the whole Project could be accomplished in all its phases, until the distribution of the water.

This was possible, as arrangements have been made, during the presence of the Coordinators in April and November 2002, with the office in LA UNION of the Ministerio Medio Ambiente and Recursos Naturales (MARN) and the Municipality of Pasaquina.

A good practical, help was also obtained from the local "Comité de Aguas" organized within the people of the involved Villages. 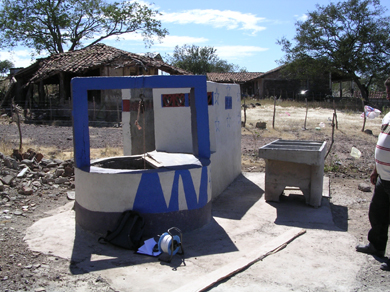