Construction of a hostel for young girls

Preliminary studies for the execution of the work, such as the architectural, geotechnical and engineering-structural examination and analysis of construction materials (cement, electrical equipment and pipes) have been entrusted to local professional firms. Once preliminary studies were completed, two tenders were issued for the construction work, but both did not lead to satisfactory results and at the end the building project was given to the local firm Ait Ben Ittou, chosen directly under the supervision of the Regional Directorate of the Ministry of Health.

The construction of the residence began on January 16, 2007. The order for the purchase of domestic equipment, especially of metal furniture such as bunk beds, tables and chairs, was made in May 2007 so as to allow their delivery in September 2007, work deadline.
Construction works have been delayed and were completed in November 2007. Even the opening of the residence, which was expected with the start of the school year 2007-2008, has been delayed mainly due to technical difficulties related to the the connection of the electrical system. This problem was solved in February 2008. Internal fittings for the residence were delivered only after the end of the work.

The residence is built on two floors. On the ground floor there are:
- The administrative area consisting of an entrance hall, a reception area, bathrooms, the office of the doctor, the director's office, the infirmary, the study room, the computer room and a dormitory for disabled girls with bathroom and shower;
- The dining room area, consisting of a lunchroom, bathrooms, a kitchen, a refrigerator, a warehouse, the Treasurer's office, bathrooms and showers for male and female staff and the laundry room.
On the first floor there are:
- The dorms, divided into two wings. Each is composed of 13 rooms for 4 girls each, a room for the supervisor, a storeroom for luggage and a block of toilets with 6 toilets, 4 showers and changing room. Each of the two wings has an emergency exit and external fire escapes;
- A covered courtyard for drying clothes;
- A common laundry overlooking the covered courtyard.


The residence was opened to female students on February 20, 2008 and welcomed 22 girls initially. The number of visitors has grown with time, reaching the number of 104 girls.

The following pictures refer to the work in progress during summer 2007. 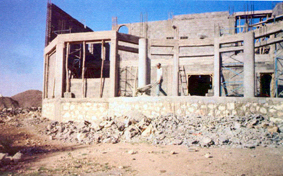 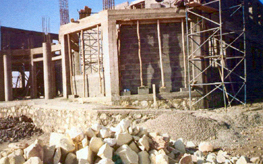 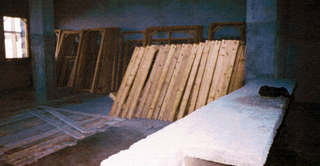 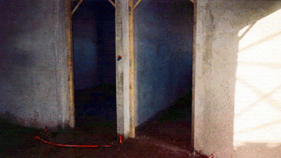 think global, act local
ABOUT US| CONTACT US| LOGIN| PRIVACY| LOGOS
you are here: Home  > Projects:  Construction or Africa  (or Both)  > 2005-16  > Interim Report
Project links: