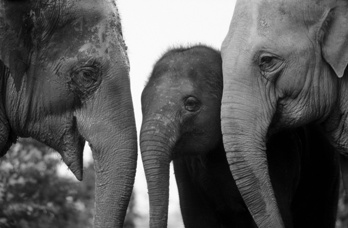 For every economic boom, as we are seeing in Asia now, wildlife pays a horrific price; herds of elephants are starving to death within forests that are too small to feed
them; if they wander outside in search of food, they risk poisoning and death from poor subsistence farmers protecting their livelihood. Every day terrifying reports of elephants killing humans and humans killing elephants hit the headlines - it is a battle for space which elephants and hundreds of other species are loosing at an alarming rate. In India, conflicts claim over 200 human lives every year and are directly responsible for over 20% of all elephant deaths.
Habitat loss and fragmentation have become the principal reasons for the rapid decline in Asian elephant numbers. Illegal logging, extensive development of agricultural plantations, the spread of human settlements and infrastructure development, such as roads and railways all contribute to the degradation of the landscape. The elephants' forest habitat is simply disappearing all around them.
Humans and elephants are now sharing the same land; this is why involving local populations is key to resolving the conflicts with wild elephants. Winning the support of villagers is fundamental to every project we take on. And there is a solution for both elephants and people: elephant corridors. Corridors are ancient migratory routes that link one forest fragment to another - bridges between islands of green. Elephants need to range widely to fulfill their ecological needs, an individual elephants can require up to 600 km², and these corridors act now as vital life lines. Already 88 elephant corridors have been identified by the respected Wildlife Trust of India and securing these is crucial for the survival of Asian elephants in the wild. Elephant corridor pioneers the concept of private land purchase and securement as a model for conserving endangered habitats and species.
The Tirunelli-Kudrakote corridor in Kerala, southern India has been identified as one of the most ‘high priority' corridors. elephant family, in partnership with the Wildlife Trust of India, is working to secure a 6 x 1.5km strip of land linking two separate forest reserves. This corridor is a key migratory route used by around 5,000 elephants; this number represents half the wild population of southern India.
Unfortunately, the corridor is currently home to 38 families spread over 5 different settlements; all of them, however, are eager to be relocated out of the conflict zone, as elephants are regularly destroying crops and houses. The corridor will be acquired in stages, one section after the next, and the families relocated to nearby safe areas, with new homes and plots of land provided. Once the acquisition is complete the corridor will be legally declared as a ‘Forest Reserve' and handed over to the Forestry Department, with whom the Wildlife Trust of India has an established and strong relationship. The area will be then left to regenerate.
This project also incorporates educational workshops for the local communities. These are designed to assist villagers throughout the relocation process, to encourage a sustainable forest dependant lifestyle and to influence a positive attitude to local wildlife.
So far, 2 sections (36 acres) have been secured and 4 families relocated 3 miles away. Funds to secure the 3rd section are now urgently needed.

Anticipated achievements or outcomes of the project:
• 5,000 elephants will be given safe passage between two forest reserves;
• Conflicts between villagers and wild elephants will be significantly reduced, saving lives and trauma on both sides;
• Improved livelihoods for local populations;
• Better understanding of conservation issues and improved attitudes towards elephants among local people;
• Protection of a 6 x 1.5km strip of land;
• Great benefit for other wildlife, including the highly endangered Bengal Tiger.

The organization strongly believes that ‘Elephant Corridor' represents the only viable, long term solution for Asian Elephants; they address the root cause of their demise and do so in a way that does not hinder economic development; both wildlife and local populations are helped.